C is also for Carlisle Cathedral close by Hadrian's wall 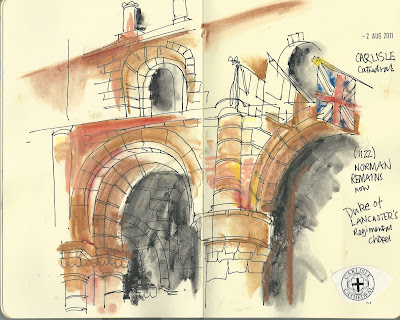 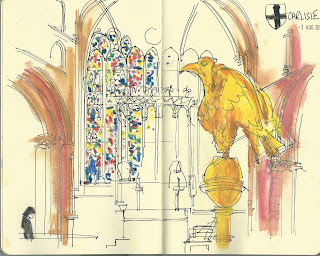 Meanwhile at the other end of England, in the north-west, is a small rosy-stoned Norman church on the English-Scottish frontier. Some of Carlisle’s stone was originally used on Hadrian’s Wall. Uniquely, Carlisle was set up as an Augustinian priory, founded by Henry I in 1122.

Carlisle is one of England’s smallest cathedrals, after the demolition of its nave by the Scottish Presbyterian Forces in 1649. The remaining nave contains lovely Romanesque arcading now festooned with Regimental Colours. Many view Carlisle as having the finest tracery in England in its Decorated east window.

An extract from English Cathedrals: A journey in drawings
This book is an affectionate voyage around the country capturing on paper the wonder of these very special places.