PSEUD’S CORNER* : Am I nearly there yet?

Living by an estuary and seeing its mood change is a superb surprise each day as I walk to my studio.

Infinity Books were running a competition:

‘Every year, ‘Love the Words’ (a quote from Dylan Thomas) asks for contributions to its annual poetry competition as part of International Dylan Thomas Day, 14 May. This year, writers around the world were asked to pen a poem on the theme of ‘water’, inspired by Dylan’s name – which means ‘son of the sea’

I was keen to contribute inspired by my daily walk.

Each day change; rise and fall,

fashioning a new passage every day.

Both anoint the green marsh,

Slop against the desultory keel

Across to Black Scar,

No two days the same,

Its shelter seen not sought,

Blessed are we who stand and pray by the flood.

Listing pretentious, pseudo-intellectual quotations from the media. At various times different columnists have been frequent entrants, with varied reactions. In the 1970s, Pamela Vandyke Price, a Sunday Times wine columnist, wrote to the magazine complaining that "every time I describe a wine as anything other than red or white, dry or wet, I wind up in Pseud's Corner". The column now often includes a sub-section called Pseuds Corporate, which prints unnecessarily prolix extracts from corporate press releases and statements. 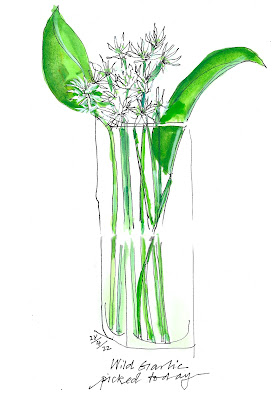 In the narrow lanes high above Pendine Sands there is much wild garlic this year. This perennial delight, also known as cow’s leek is the wild cousin of onion and garlic. Records of its consumption go back 1500 years with the Celtic Britons enjoying it. It is also a favourite of brown bears and wild boar.

Aside from its culinary applications in salads, as a vegetable, in soups and sauces it is also a good aid for cardiovascular and digestive ailments.

Do be careful that you are not picking lily-of-the-valley by accident, it does look similar, lily-of-the-valley is poisonous. To be sure grind a couple of leaves between your thumb and forefinger and you should get that delicious garlic aroma if you have the right stuff.

Locations of wild garlic in parts England are a closely guarded secret. A friend of mine who has just moved to near Arundel in Sussex told me that the locals were less than keen to tell of where to find wild garlic in the local woodlands. Sussex silence? 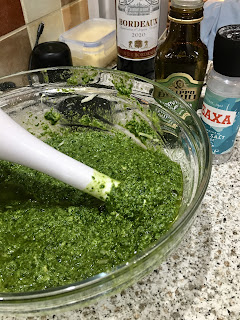 About 200 g of garlic wild garlic leaves and 300 mL of good quality olive oil and 100 g of pine nut kernels salt and pepper to taste will make you a superb pesto sauce. That you can keep the whizzed-up sauce in a Kilner jar in the fridge, ready for some fresh pasta.

Do go to it for wild garlic!

‘Britain’s towns and cities do not usually sit cheek by jowl with its countryside, as we often casually assume. Between urban and rural stands a kind of landscape quite different from either. Often vast in area, though hardly noticed, it is characterised by rubbish tips and warehouses, superstores and derelict industrial plant, office parks and gypsy encampments, golf courses, allotments and fragmented, frequently scruffy, farmland.’

Five favourites of mine around here, discovered during the course of a college project:

It squats on the landscape like some Central European nuclear processing plant. Its three silos hug the main body of this concrete lovely. Situated at the end of lane in broad fields.

Much to see here, industrial units for the usual suspects: Howdens, Wix, Screwfix. Yards full of containers briming with scrap metal and colourful small units (see below)  in the Post-Modern style given over to Prize Fighting Gyms and Schools of Ballet. 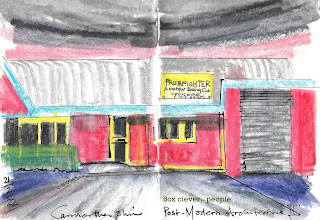 Most of the buildings now house NHS ambiguous medical specialists, others remain empty, dilapidated. Grade II listed chapel. Built by the inmates sadly closed now. Inmates because this was a hospital as County Asylum build in 1865, closed in 2000 after reports of bad management.

Every town has its impossibly large BT Telephone Exchange. Most of the space in each of these is not used. All the technology these buildings used to house is now on the size of a thumb-sized computer chip. The style here is ‘Brutalism’ with panache at its most exquisite, including Venetian-style balconies wedged into it at the very top.

Its  back yards and building entrances have two mood, two faces:

1. Weekdays it’s busy, busy with curious displays of unwanted office equipment shunted into the car parks or waiting patiently for a nice skip to pass.

2. One  weekend I had occasion to visit. The sun was high, no cars, a deserted air, the buildings (built 1949 mostly) were glistening in the heat, I was reminded of Santa Monica CA.

Beguiling places one and all. Perhaps the last words from Jonathan Meades

“Everything is fantastical if you stare at it long enough, everything is interesting. There is no such thing as a boring place.”

From the Introduction to his book Museum without Walls, writings and scripts.

*Marion Shoard is a British writer and campaigner. She is best known for her work concerning access to the countryside and land use conflicts. In 2002 she became the first person to give a name to the "edgelands" between town and country.