All red brick Tudor at the front. All Baroque at the back, this is Hampton Court Palace.

It was built by Cardinal Worsley by the side of the River Thames and promptly appropriated by Henry VIII.

The royal beasts guard the entrance. 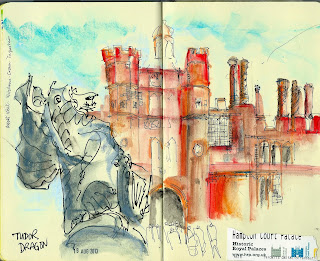 We walked through the kitchens, room upon room of cooking paraphernalia all of which could feed up to six hundred people. It was claimed the servants could get a meal from the kitchen to the King’s table in less than two minutes. 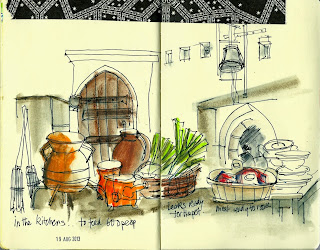 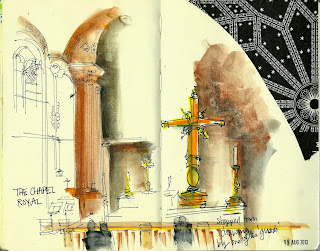 The Royal Apartments were "wallpapered" with rich tapestries and portraits-royal. We went on through to the cavernous royal bedrooms where one is invited to sprawl upon huge mattresses look up to the ceilings for some strange light show.

Next is the Chapel Royal where I was admonished making a drawing inside the chapel. It contains a lovely reredos by Grinling Gibbons and this is where the work part really starts.

With St James Palace, Hampton Court is one of the only two remaining of Henry VIII's many Palaces. As far as one gathers, life for the Royals then was continual route between one palace and another. In Henry’s time, as soon stocks of food were exhausted in one place or the smell of rotting material became too overpowering, the assembled royal company would move on! 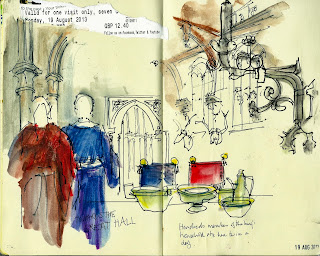 The other Sunday we set off early to Essex for some covert fly-fishing lessons from Richard, the prelude to an excellent lunch cooked by Fifi.

Well, we made a reasonable start and with good grace Richard leant a rod and reel for practise before we head up to Scotland in ten days time.

We hope to cast a fly in Loch Morie, well north of Inverness.  Morie derives its water from the surrounding hills close by Meall Mor Lodge where we will be staying. So there is time for a little more practise, probably a lot more.
Posted by Tim Baynes Art at 08:26 No comments:

Last week we were plunged straight into Autumn.\
In at the deep end
There was a palpable ‘back to school’ feel across the land
Trains were again crowded.
Local roads busy again with 4x4s vying for small parking places,
Already everybody appears to be in his or her winter wardrobe. 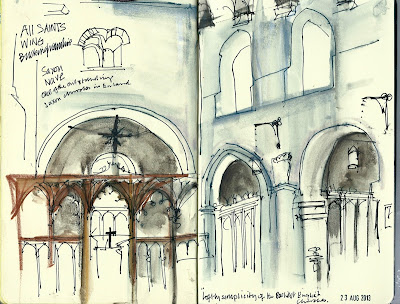 In my continuing quest to visit Simon Jenkins’ top church picks in Buckinghamshire I again went north of Aylesbury to see three more, one of which, All Saints in Wing, gets four stars from Mr Jenkins.

Norman Magic
St Michael and All Angels in the Village of Stewkley has so much Norman decoration inside and out. Lovely zigzag carving and around arches and doors and its sturdy tower is similarly adorned. The church narrowly missed being ‘moved’ as it was part of the 1970’s site for a third London airport at Cublington, down the road 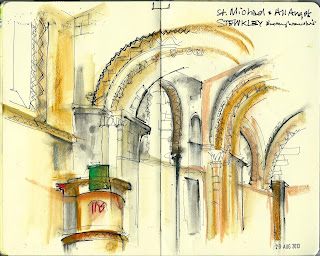 A fire clears away the Victoriana. 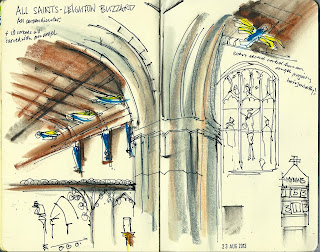 One would never wish fire on any church however All Saints Leighton Buzzard (in Bedfordshire) suffered such in 1985. However the sad event did serve to clear out of a lot of Victorian appendages.  The refurbishment has been wonderful with 18 angels flying from the interior roof in gold and blue tunics.

Saxon Splendour
All Saints Wing one of the great Saxon Churches in England. Its Apse has a crypt beneath it, which you can just peek into. Its lofty pain interior represents the simplicity and solidity that was the hallmark of that period. Nothing gets in the way and later additions don’t detract!

This is a very different part of Buckinghamshire to ours down south, very little traffic and the constant hum of Heathrow and the M40 and impatient 4x4s.
Blessed Bucks? 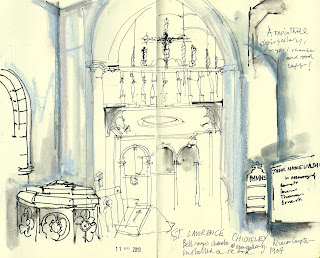 Just northeast of Milton Keynes, and one is still just in Buckinghamshire, just.

There is a clutch of six churches that are playfully included in Simon Jenkins is wonderful book: A Thousand Best Churches.

With my Brompton folding bike I was that there is little more than 60 minutes from the house.

This is secret Bucks and protected from the raw of the motorway and Milton Keynes.

This is very flat undulating country and one point I strayed into Bedfordshire to see one of the churches on my list.
St Laurence Chicheley nestles up to a lovely mansion 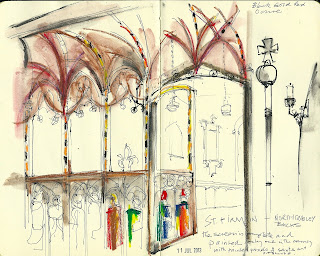 All Saints in Turvey Village 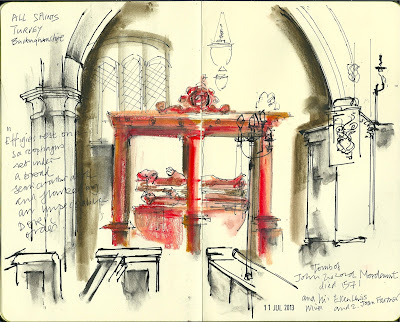 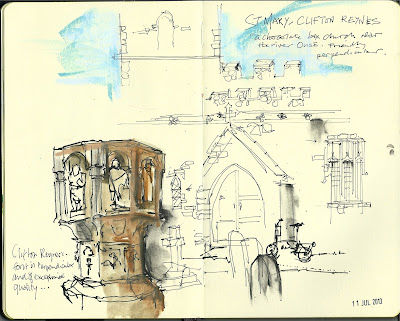 My route from Turvey to St Mary’s followed the Great Ouse River, its banks was littered with 'No Fishing' signs.

THE REMNANTS OF WAR

Reflecting back through the Summer.

Outside the museum building (which was in the 60’s and 70’s was America’s Department of Information) were parked machinery of war. Helicopters, a jet fighter tanks and other armoured vehicles were lined up like second-hand cars on a dealership forecourt.
Inside and it was busier than I remember. There was the uncomfortable hush as visitors walked around the rooms of exhibits. Again, I saw the horrific images of war taken by the photographers.  Photographers were so very active in this conflict, many of whom lost their lives.
As if visiting some altar deity I made a beeline to see Nikon F camera of the Japanese photographer Bunyo Shikawa. He was stationed in Saigon and covered the Vietnam War as a photojournalist from 1964 to 1968.  I made a sketch of his wonderful camera.

My fascination with this conflict has been further enhanced since my last visit to Vietnam by repeated viewings of the biopic on the photographer Don McCullin that appeared in January. He was active here in the 1970’s and covered the Battle of Hue city for The Sunday Times.

The Vietnam War was arguably the last great public conflict. The Falklands and wars that followed thereafter have been strictly edited in terms of what we see and don’t see.
Posted by Tim Baynes Art at 22:48 No comments:


We hired two supremely comfortable bikes and headed out to explore the old city, peddling towards the cathedral along Gedimino Street. Gedimino Street is Regent Street, Pall Mall and the Mall rolled into one without the traffic. 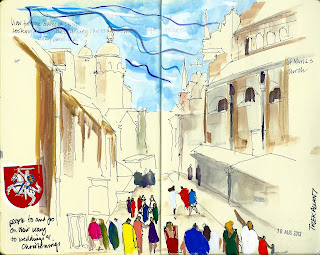 Bright sunshine during the day and a biblical storm on Saturday evening bringing the trees down across the cycle paths we explored along the river the next day.

Saturday must have been national wedding day. Outside or close to every church entrance a wedding party was waiting or being photographed. Each group was extremely colourful with the bride and her entourage all in exactly the same colour; our favourites include purple, scarlet, royal blue and yellow.

This is an excellent city for salami and kabanos and local beer.

Vilnius is a city of counter point: The Museum of Genocide Victims gives you a chilling picture of how people in the country suffered under the hands of the Nazi’s and latterly from the Soviets from 1944 through to 1991. 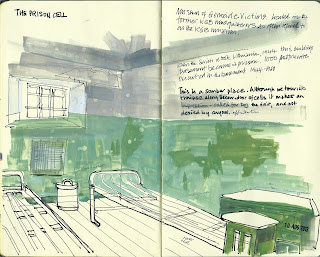 The building was the headquarters of both regimes. We walked along the basement corridors looking in on the cells. Then, up another set up steps and along a passage to the execution chamber. Over 1000 people were killed in this building. 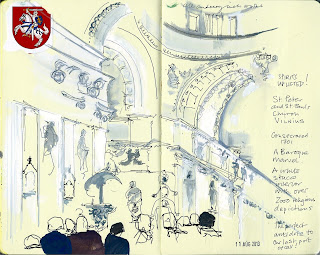 The churches of Vilnius are blessed antidote to the feeling of sadness one has after this macabre museum. The Church of St Peter and St Paul is a baroque marvel. All white stucco throughout is nave and chancel and the side chapels.
There are over 2000 religious depictions, literally plastered everywhere.

The Gate of Dawn is a city-gate of Vilnius, part of the city's fortifications in the fourteenth century. It houses a small chapel where Our Lady of the Gate of Dawn draws visitors and local people to pay respects and make their supplications.

This is a relatively compact city. Getting round on a bicycle is a delight and if you check the guidebook and find you have missed something at a point previously visited its easy just to peddle back there.  Figuratively we might peddle back to Vilnius again one day.
Posted by Tim Baynes Art at 08:10 No comments: