FLOWERS OF HEDGE AND FIELD 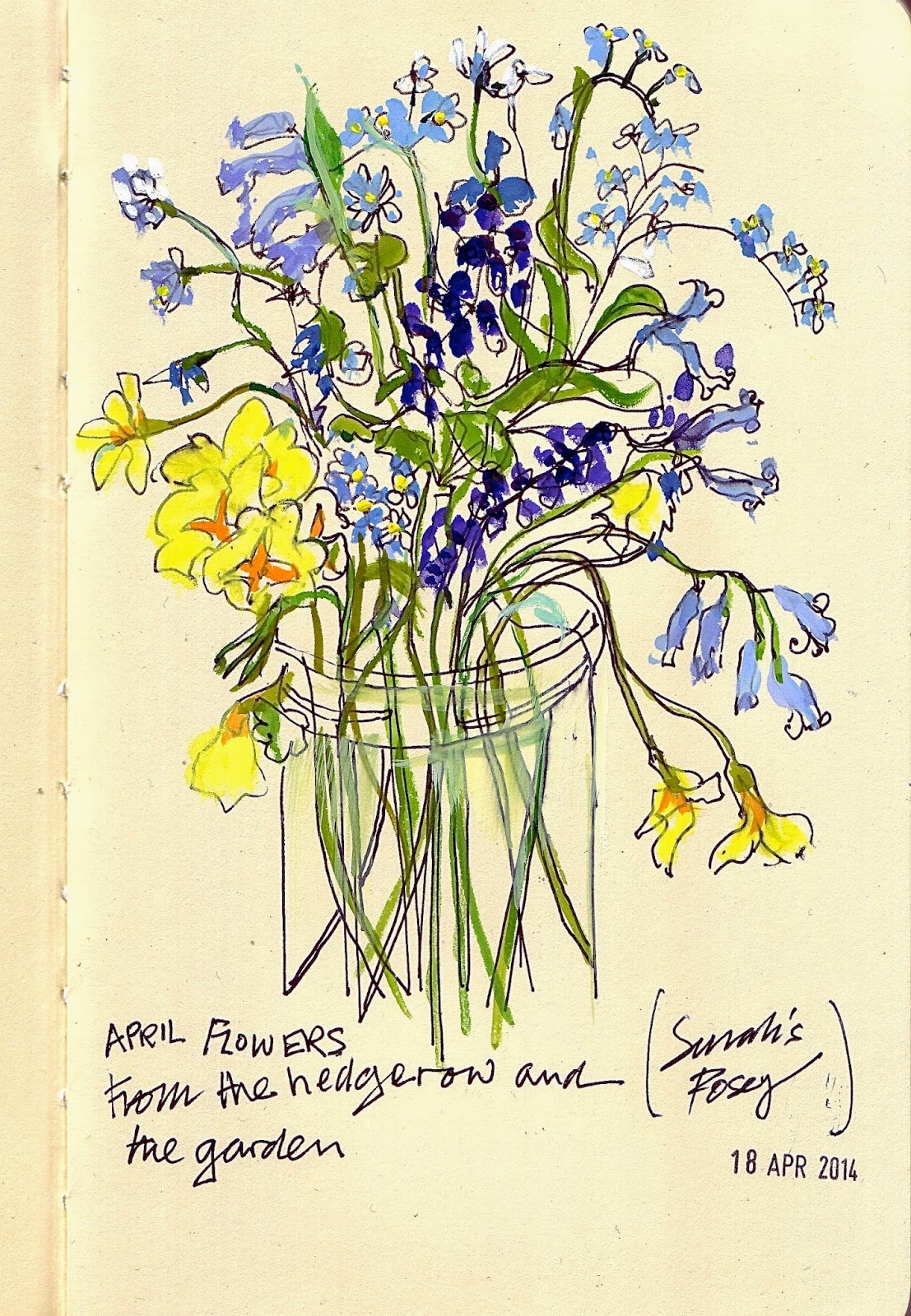 Strangely, every year between mid April and mid May
Our roadsides are strewn with lovely flowers
Primroses, and in our woodlands, great carpets of bluebells
Forget-me-nots nestle everywhere,
Sheep’s Parsley shows and Alkanet.


Our friend Sarah J picks from the woodland floor 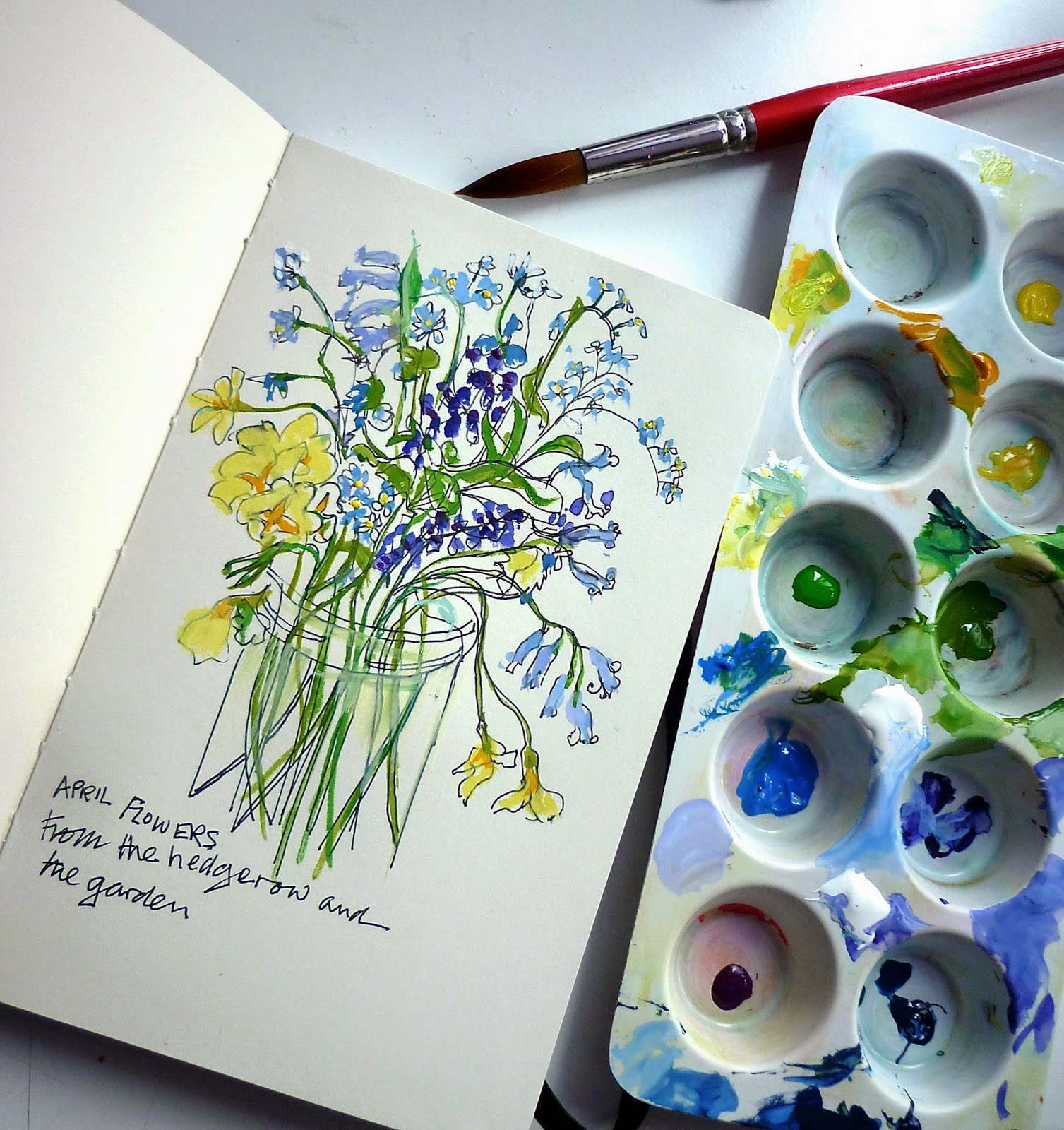 and spices her Posey’s with flowers from her garden. 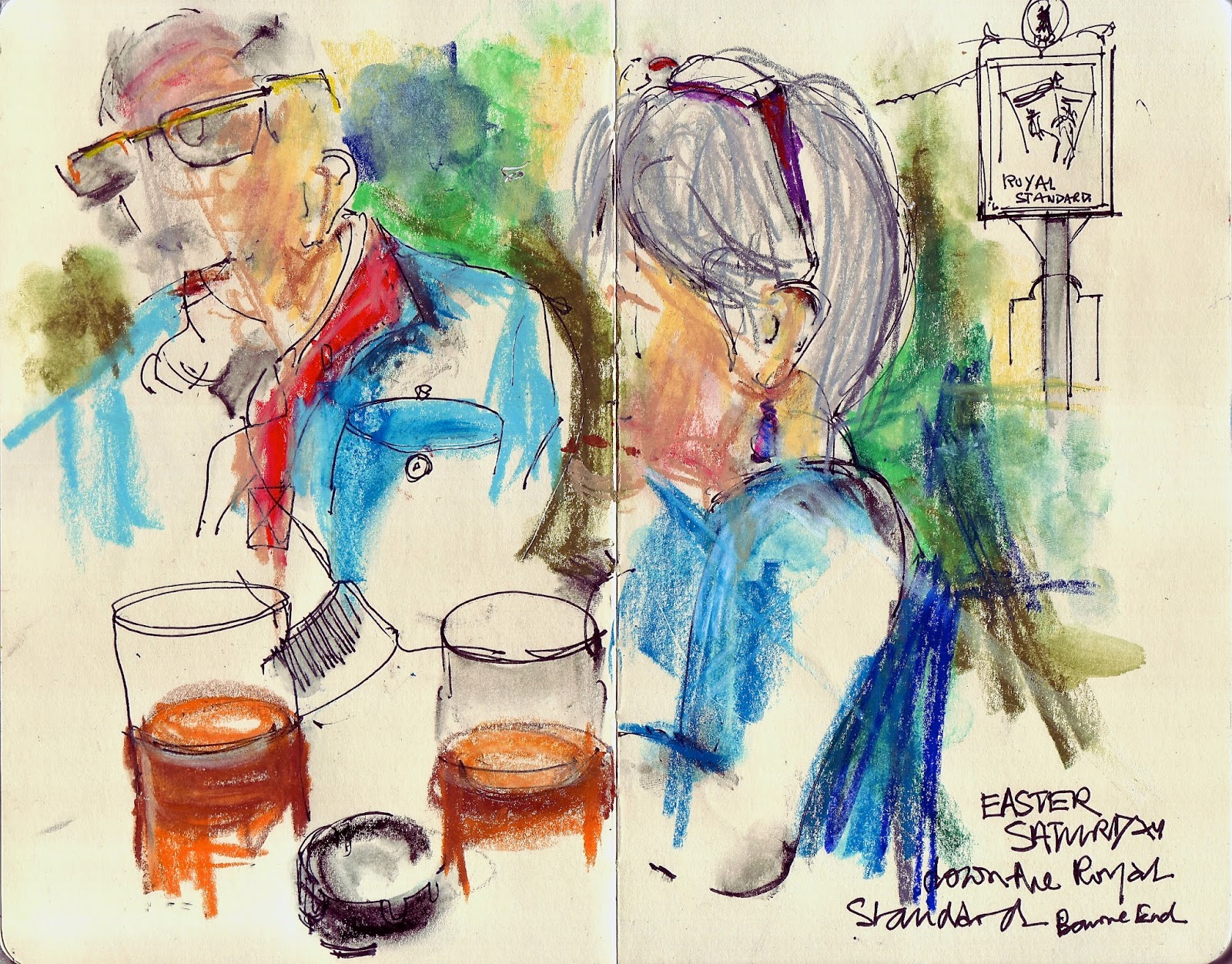 Fine ales in abundance but a little crowded hence we shivered outside with friends Derek and Sarah.

Just because the sun shines at Easter the wind is in the north east, to prevent us getting too smug of an evening.
Posted by Tim Baynes Art at 14:48 No comments:

BARBARISM AT THE BRITISH MUSEUM

Visited Vikings Life and Legend at the British Museum, the latest blockbuster show at the BM that has easily drawn the hoards (of tourists) from across Europe.

Along side a thousand others we dutifully shuffled past some delightful treasures that the exhibition’s organisers have pillaged the museums of Scandinavia and Germany.

The most exciting discovery I made was in conversation with Sian after the show relating to the origin of the word berserk: Berserkers (or berserks) were Norse warriors, primarily reported in the Old Norse literature to have fought in a nearly uncontrollable, trance-like fury, a characteristic that later gave rise to the English word berserk. (Wikipedia – thank you)

Most historians believe that berserkers worked themselves into a rage before battle, but some think that they might have consumed drugged foods. This preparation would help you enjoy the exhibition more fully I am sure.

Another in the series Travels with my architect

A semi-sunny day, Trevor and I travelled through the yellow rape fields of east Essex to the coast, to Jaywick.

Jaywick, planned in the 1930’s as a holiday village for Londoners and now on record as one of the most deprived places in England.

We had a jolly time.
Parking easily we headed down the Broadway, the main street and into the arms of Phrills Diner. We chatted with Mr and Mrs Phrills, their excellent establishment is open all year round “for our regulars” said Mrs P.

After a sausage sandwich (me) and egg and bacon sandwich (Trevor) we strolled down the Broadway, admiring the architecture, T taking many photographs.

Eventually out onto the sands, clouds scudding across the sky, a multitude telegraph wires and sand blown across the roads and walkways.  A wide clean sandy beach and quite unspoilt.

Friendly locals responded to greetings from two odd strangers, one bearing a Moleskine the other a huge camera. However Jaywick has become a bit of a mecca for writers and filmmakers because of isolation and despair (and strange) disposition.

Back along a narrow promenade, towards our car, we stopped coffee and bourbon biscuits at LJ’s Beach Bar. Another good chinwag, with the LJ’s, Mrs was polishing the already spotless counter and Mr was perfecting his cheese toastie for intended for Mrs LJ.

We headed to the south-western outskirts to the Martello Holiday Park, acres and acres of trailer homes with shops and laundrette and key-pad gates; a complete city-state.

Jaywick’s very own Martello Tower, thoughtfully refurbished in 2005, afforded fine views out to sea, I suppose in the direction of Belgium, inland we gazed out over the roof tops of trailer homes and mused it would be a great place for a spy to hole up.

The sun was now out and the ice cream van had kindly parked right next to us so we were really obliged to relish a Ninety-nine Flake before heading home not before buying some lovely free-range eggs on the way out.

Wikipedia: The village of Jaywick was planned by Frank Stedman as a cheap holiday retreat for Londoners in the 1930s. Many of the original houses became permanent residences, and the population now includes large numbers of retired and working people. A 2009 report found that four out of Eastern England's ten cheapest streets in which to buy property are in Jaywick, with property on Tamarisk Way selling for an average of £44,050
Posted by Tim Baynes Art at 15:13 No comments:

A NIGHT OUT AT THE BREWERY 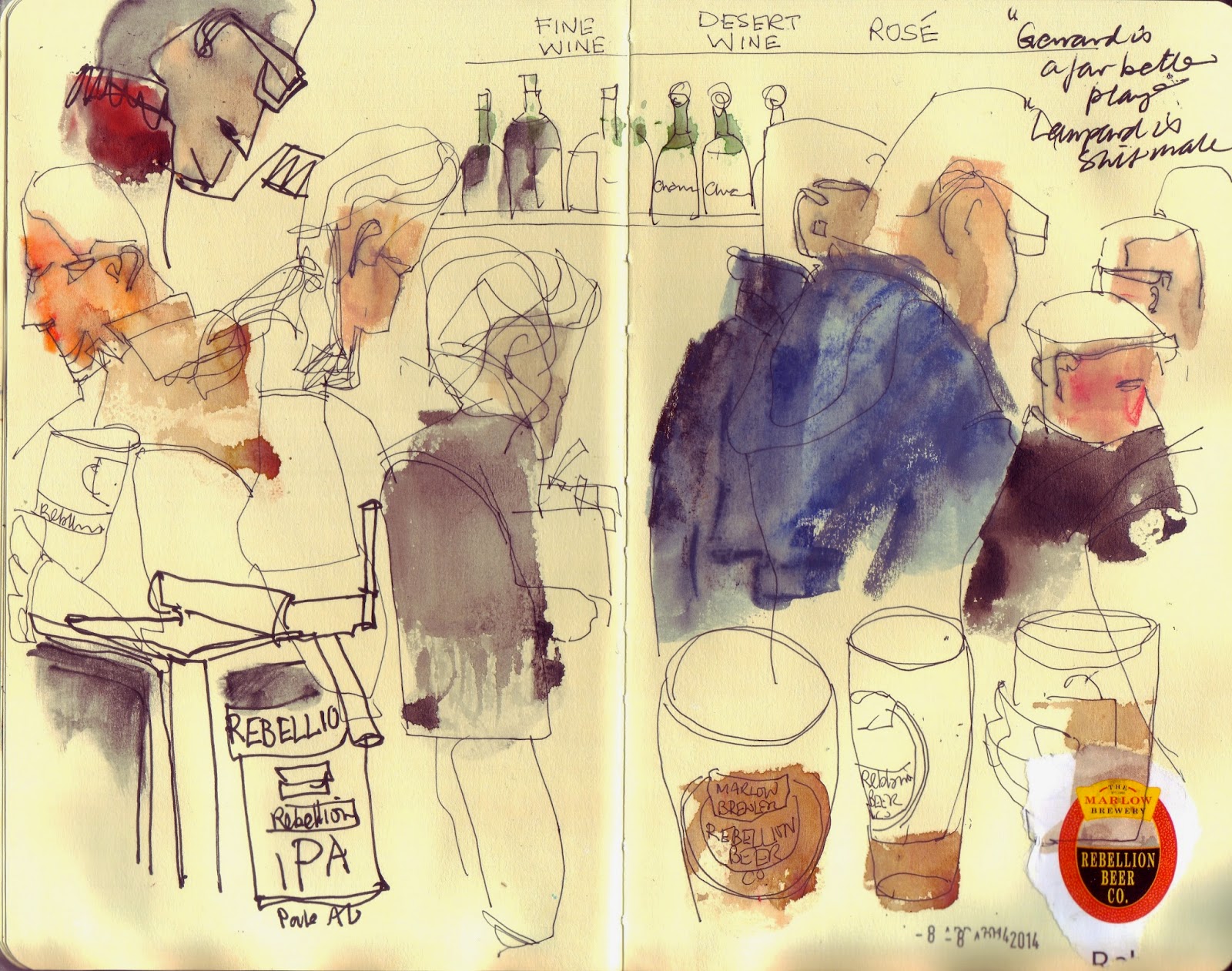 The Marlow Brewery, constantly at work on our behalf, brewing beer in a traditional style supplying the local pubs with quality beer all year round. Praise the Lord.

On the second Tuesday of the month, we who are members enjoy good fellowship and fine beer, the brewery doors open 19:00 last drinks 21:30

About five hundred people are cheek by jowl enjoying the very best in ale, conversation, burgers if needed, tall tales and silly stories.

A more uplifting, wholesome and good-natured gathering is hard to imagine.
Posted by Tim Baynes Art at 10:14 No comments:

From the window in room 729 in the Thistle Hotel.

I gazed out across the permanent greyness.
In the foreground of my view is the roof of the multi-storey car park almost the bereft of vehicles.
Behind this is housing, concrete on concrete, interlaced with flyovers guarded by tall neon lampposts.

Yet more towers stretch into infinity. 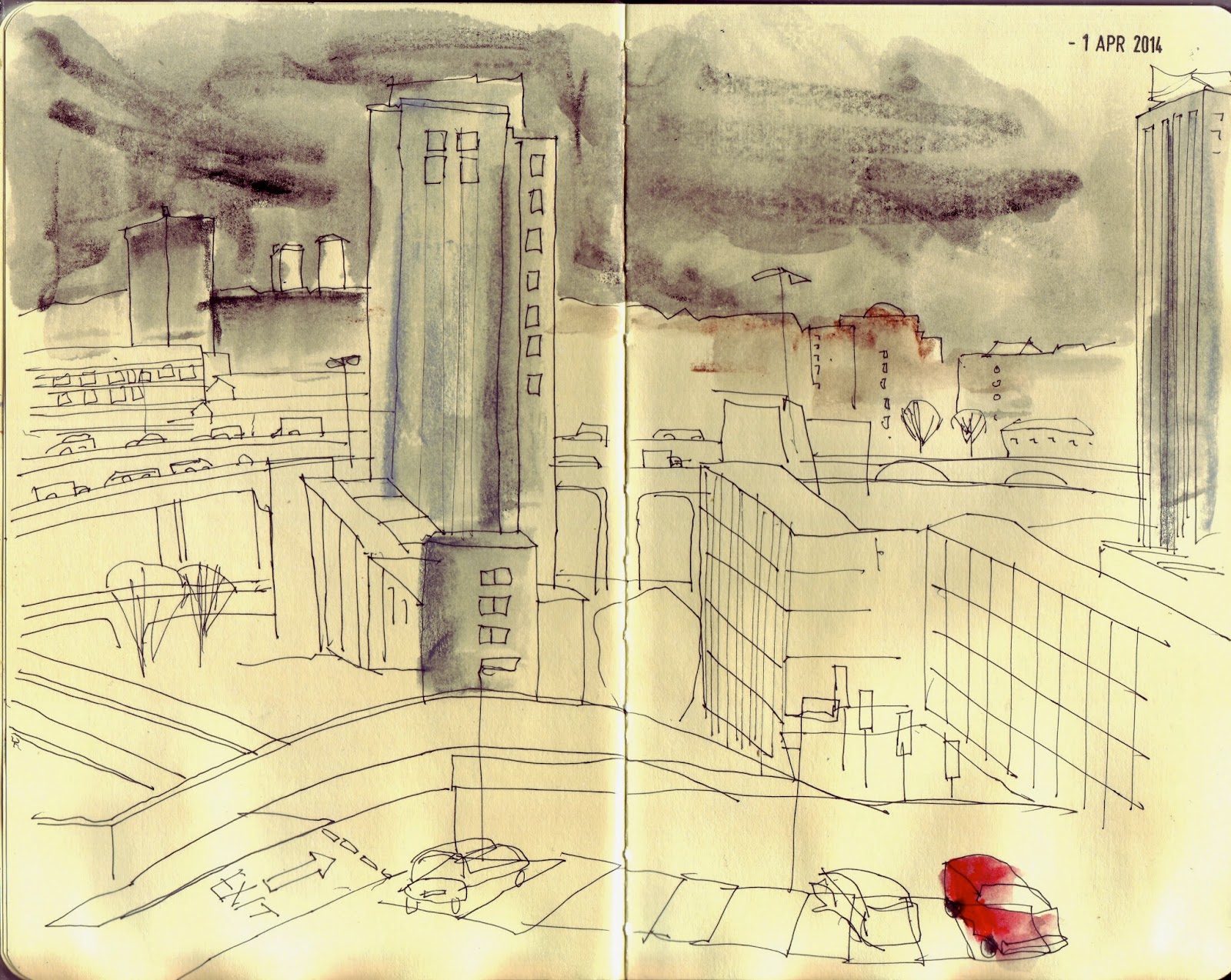 This is the bleakness that forges a strong human spirit and constant good humour in this part of the world.