For five years now Trevor and I have been exploring the coast of Suffolk Essex and Kent. I post the stories of the jaunts here as TRAVELS WITH MY ARCHITECT The offbeat, kiss-me-quick atmosphere of these sea fronts and coasts fascinates architect and photographer Trevor Clapp and I.These places are captured in photographs and drawings we have taken/made at the time of each visit. The words I write soon after under this banner of Travels with my Architect. Trevor's implacable architectural eye has created some great pictures, which will soon find a home on a dedicated website. He takes the most exciting photographs.

Lolling around in Laugharne 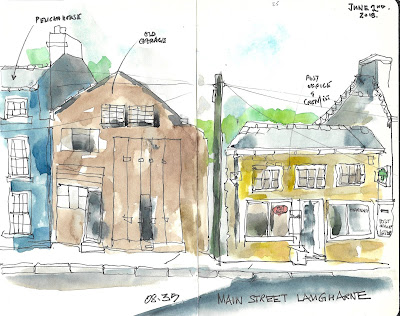 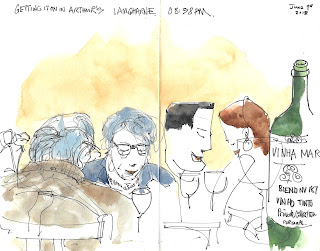 For no reason, except that we are entranced by the place we were again in this delightful place.

Checking into The Browns https://www.browns.wales again we were then soon round the corner and down the road, four miles away to Pendine Sands. The beach shimmered in the sun and people seemed to dissolve in the haze.

That evening we enjoyed an excellent meal in Arthur’s, a café restaurant in Laugharne. Burgers for the both of us, served with a shamelessly cheeky Portuguese vinho tinto.

All the nosh in the part of the world is well cooked, tasty and reasonably priced.

Next morning I crossed the street from The Browns to the post office and bought a copy of the Carmarthen Journal. It is lovely to descend, over coffee, into local events in the area “Man carrying garden spade arrested after woman is attacked in alleged street assault” and the coverage of the A&E doctor going onto Love Island.  There are lots of pieces about things to do and see in the area.

In the 5th century AD the armies of Rome left Britain to the fate of Anglo-Saxon invaders.  The Welsh, having resisted these armies so fiercely had by now become so very Roman in habit and language, more so, it is claimed than any other part of Europe.

Emperor Honorius decided that his legions in Britain were needed elsewhere. Yet Wales, was so fortified by the men of Rome, these lands to the West of the Rivers Severn and Usk remained self contained and prospered.

Just off the M4 is one of the most exciting legacies of Rome’s time in Wales.

Isca, was the site of a Roman legionary fortress the remains of which lie beneath parts of the present-day village of Caerleon just north Newport in South Wales.

On a sunny day we strolled around the widespread remains of Roman workshops, barrack blocks, granaries.

Then crossing the road, we wandered in an unusually, a large and impressive amphitheatre. The arena is oval in shape with eight entrances still easily seen. The stadium is thought to have had a capacity of around six thousand spectators. It is probable that apart from the usual gladiatorial diversions, the legionaries probably used it for parades, displays and exercises.
Posted by Tim Baynes Art at 19:51 No comments:

Tea by the Sea is just down the road in Pendine. Great coffee tea and cakes.
Pendine is never crowded even in high summer. The Beach is a 6¼-mile long at Gilmore Point, at the western end is a small bay of sand and rock-pools, with a wall of high limestone cliffs and secret small caves. 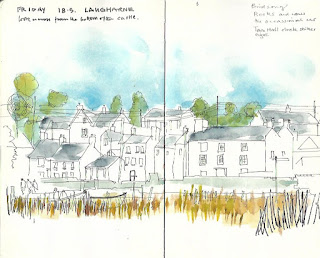 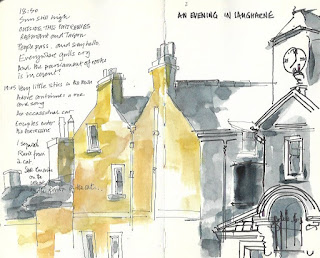 Evening sun is setting over the town of Laugharne; share it with seagulls and a boisterous rookery. Golden sun makes the chardonnay sparkle in your glass; all is orange, gold and chrome yellow.

Morning, don’t be late abed! Get up and walk down Victoria Street. The River Tâf’s estuary iridescent in the sun through a high garden of grasses and teasels. Walk down to the base of the castle. Another day begins as people greet one another.