TRADING A RIVER FOR A CANAL

We were supposed to finish our Thames Reise at the end of last month. Sadly Dave had injured him self in some impossible feat of DIY, given Mike and I had blocked the day for wholesome company and exercise he suggested a cycle along the Regents Canal.

A beautiful day, duck-egg blue sky and sunshine, we gained the Canal on the northern back opposite Regent’s Park. 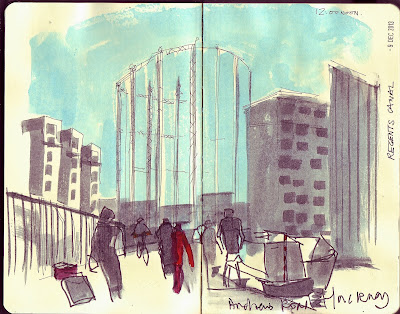 This waterway is some eight miles long. It was built during the early 1800’s part of architect John Nash’s master plan for the Prince Regent to redevelop a large area of central north London; the canal, running for part of its distance along the northern edge of Regent's Park, was included in Nash’s cunning plan.

Since it’s opening and until the Second World War coal, steel, grain, the raw materials for HP sauce, leather waste, and cresylic acid used making disinfectants, solvents and zinc ashes have been carried along this waterway by barge and boat.

On through to tourist Camden, Islington, trendy Hackney, and Kingsland; onwards, eastwards; we arrive at Limehouse Basin where the canal meets the river.

The towpath, in places, rattles under our wheels; I since discovered that in 1979 the Central Electricity Generating Board installed underground cables in a trough (covered with concrete slabs) below the towpath. These 400 kV cables now form part of the National Grid; pumped canal water keeps the cables cool.

Returning westwards from Limehouse we enjoyed hot soup and quiche at the Pump House Café next to the City Road Lock. Another trip in the summer perhaps? when more eating places will be open along this lovely London Water Path.

(The Thames journey is planned to conclude in January 2014)
Posted by Tim Baynes Art at 19:09 No comments:

THE FONT AND THE TEA COSY 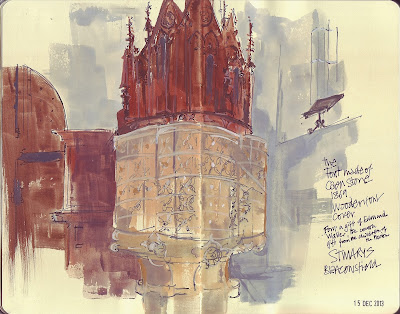 THE FONT AND THE TEA COSY

Another covert visit,
An opportunity between the Christingle Service and Evensong,
To practise my reading for the Carol Service next week.

My rehearsal done, attention and pen are turned to the Font,
By the South Door.
The door, entrance to the Church,
The Font, admittance to Father God.

St Mary’s Font a simple Romanesque
Atop a cover of Gothic soaring up,
This impossible and quite lovely tea cosy.

Now, behind me the Sidesmen arrive,
Croupier-like they shuffle Prayer books and Service sheets.

I cap my pen and scuttle away.

The Font and The Tea Cosy is part of an occasional series exploring details in St Mary’s Beaconsfield. God is in The Detail.
Posted by Tim Baynes Art at 11:47 No comments: