A calamity at Cowdray 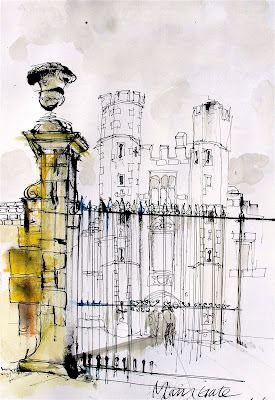 Cowdray House sadly contains the ruins of one of England's great Tudor houses. What is left sits just east of Midhurst, West Sussex on the north bank of the sleepy River Rother.

Cowdray House was mostly destroyed by fire on 24 September 1793; nonetheless, the ruins have been Grade I listed.
Wandering round this exciting place it is easy to agree that it is architectural equal to many of the magnificent palaces and country houses of that time. A favourite of Henry VIII he made three visits to the house during his reign, and he encouraged the kids to go. The house was later visited by his son, Edward VI in 1552 and by daughter Elizabeth I in 1591.

This was another super spot to draw under the tutilege of illustrator Paul Cox who directed the West Dean College drawing weekend which I was so pleased to attend.