‘I have always held and proposed against all comers to maintain that the Cathedral of Lincoln is out and out the most precious piece of architecture in the British Isles’.
John Ruskin

We had, a couple of years back, pressed the pause button on our journey round the cathedrals of England. Although, to date thirty have been called on, drawn and comments made by Siân in each one’s Pitkin Guide.  I had started on a book bringing all the drawings together.

However, unvisited were Christchurch Oxford, Guildford (both close) and Lincoln.

Decision made, Lincoln first. The Cathedral Church of the Blessed Virgin Mary. We arrived without Ruskin’s comment, which I discovered later.

Almost completely shrouded in builders’ polythene some of the lovely Norman west façade was clear to see, the original Lincoln, many of the rounded arches of the doors and niches survive.

Inside, after £16.00, was a broad nave gave off to short transepts.

The biggest imprint on my mind will remain the Choir Screen. Gorgeous, pale, honey coloured stone with early English-decorated carvings would have easily won the masonry X-Factor final.

Completed between 1290 and 1330 this screen  separates the Choir from the rest of the place. Its intricate carvings still bear traces of blue and red, silver and gold.

Trivia fact: The cathedral was used for the filming of The Da Vinci Code filming mainly took place mainly within the cloisters, and chapter house which is impressive with its ten-sided central pillar.

Another Lincoln treat is the font, second half of the 1100s. It is made from a black carboniferous limestone sourced in Tournai, France.  However finished by waxing and polishing gives it the appearance of black marble! Top tip.

Ruskin was right about most things. He went on to add  “And roughly speaking worth any two other cathedrals we have’

Oldham: 20 years plus one day

Next morning we made another jaunt.

This time northwards and upwards, up to Denshaw. With its population of five hundred people Denshaw is celebrated for its annual brass band contest held on every Whit Friday.

Frank was keen to point out the village shop. In November of last year the Saddleworth Independent reported:
Saddleworth’s most remote village will have its own shop again soon as the disused public toilets in the centre of the village are being converted into a new general store.

And so it came to pass.

It was beautiful sun-through-cloud morning, and looking south the whole of Oldham and Manchester was set out before us. Higher still along the road to Ripponden the grassland moors have turned to gold, shimmering in the breeze. Westwards and almost hiding from us, Rochdale.

Twenty years on house prices have changed, and those lovely mills that remain are now warehouses for mail order and online shopping. Every village now has a posh café. What remains the same is this part of England having easy and swift access to breath taking landscapes in rain or shine. I’ll be back soon.
Posted by Tim Baynes Art at 20:00 No comments:

In the mid ‘80’s Frank and Carol would lend me their home on the edge of Saddleworth, right border with Yorkshire whilst they went to Yugoslavia for their annual holiday. Their daughter Jane’s wedding was the last time I was up there; with the girls; Megan and Bronnie, Sian. We had all changed in the car park outside the small chapel - just in time for the service.

We exchange Christmas Cards every year. Each card one plotting changes in our lives. Frank went from international company CEO to become sub-postmaster serving on multi-cultural frontline of Oldham.

A rush of blood to the head made me reach out and invite myself back! Arms were opened wide as I ended the 210-mile journey a Friday or so ago. We rolled back the years. Friendship is not seeing someone for twenty years and then talking as if you only saw them less than twenty minutes ago.

Perhaps this was where I had become re-infected by the bug to draw? On their front room wall was a drawing of Upppermill I made in 1984. Several more small drawings were dotted around the same home that was also mine for several summers.

As I had hoped we went out for a drive around Saddleworth. The district is a jewellery box of villages all set in the west side of the Pennine hills.  We visited Delph, Dobcross, Friezland, and Greenfield (driving up to Dove Stone reservoir).

In Grotton, the Grotton Arms (where Carol used to work) is now a Co-Op.

We stopped at Uppermill (for an excellent coffee) at Java No 73 before going back home to Springhead.
Posted by Tim Baynes Art at 20:00 No comments:

'Stockholm syndrome, or capture-bonding, is a psychological phenomenon in which hostages express empathy and sympathy and have positive feelings toward their captors.'*

I was in Stockholm of my own free will.
In fact I arrived the day before an exciting assignment.
Enabling me to soak up a little more of a city.

I disembarked the plane and enjoyed a short train ride into the centre. 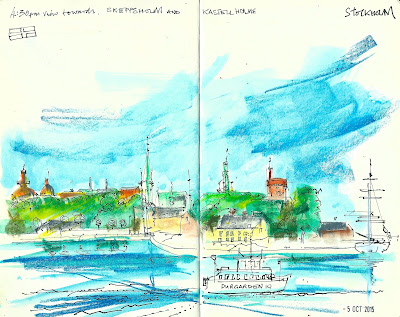 It was a warm sunny afternoon. After two quayside drawings, catching terracotta, pink and ochre buildings with silver slate rooftops. I visited the Fotografiska on Stadsgärdsleden. This is the museum of photography.

Fotografiska is showing ‘Martin Schoeller Up Close”  - work from one of the world’s most treasured portrait photographers (apprentice to Annie Liebovitz). Included were his portraits of Zlatan Ibrahimovic, Barack Obama, Katie Perry, Hilary Clinton, Jay Z.  My favourite was Schoeller’s picture of Michael Douglas, Bowie-esque and very witty. 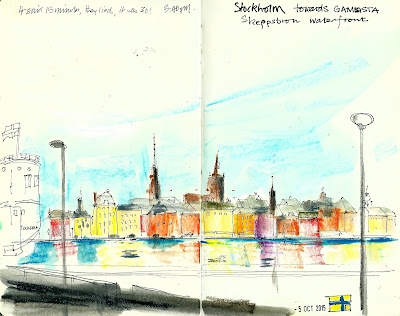 *Copyright and grateful acknowledgement to Wikipedia

I suppose I really started drawing, sketching, colouring in (as Siân describes this activity) in 1986.
In a recent re-modelling of one part of the house ALL the sketchbooks  have been brought together in one place.

Quite lovely to see them all together.

Eight six books and I am guessing some five thousand drawings.
Posted by Tim Baynes Art at 19:49 No comments:

Curious Coast is a book celebrating the seaside in drawings, 38pp of entertaining drawings and prose.

Order by e mail: tim@timbaynes.co.uk and I will post you a copy and we can sort out PayPal payment thereafter! 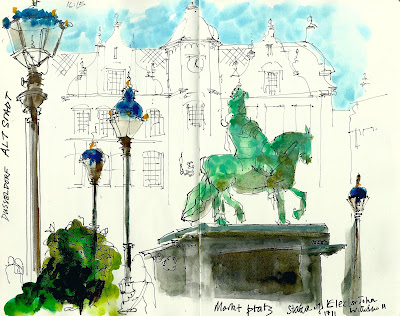 I’d booked an earlier than usual flight into Dusseldorf (working the next day) in the hope of visiting The Museum of Art: Kunstpalast.
Flight confirmed, the Kunstpalast website advised they were closed on Mondays (!)

It was a lovely warm afternoon so I went to Tourist Information and obtained a subway map and street plan and caught the metro to the Alt Stadt. The focal point of the Old Town is the Marktplatz where you'll find the imposing Town Hall (Rathaus)

The Jesuits educated John William, (never a bad thing in those days). and in 1674 he made a grand tour to Italy. Soon after Europe was absorbed in the Nine Years' War 1688–97

And then after  the War of the Spanish succession Johann Wilhelm also received the Bavarian Upper Palatinate.  He died in Düsseldorf and was buried in the St. Andreas Church (a sweet baroque fancy) not far from where this drawing was made.

*He was of those having the privilege of electing the Holy Roman Emperor.
Posted by Tim Baynes Art at 20:00 No comments: