BACK IN KENNINGTON PARK: BAND AND FOUNTAIN 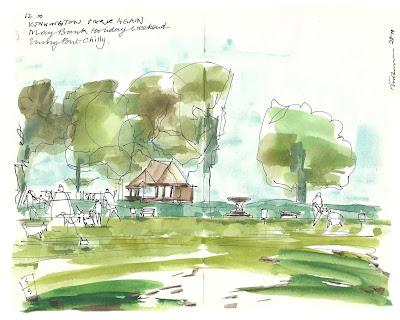 It was a lovely sunny day but one with one of those chilly East winds that always makes a nuisance of themselves in May. With coffee and sketchbook I set down to draw. Two Kennington lovelies where
in view

The Bandstand built in 1900, hosted concerts from military bands. An average of 2,600 people attend the performances in 1905.  Concerts continued there until 1950. Charlie Chaplin grew up locally and is said to have met his first girlfriend in the park, perhaps enjoying the music with her.

The Slade Fountain installed in1862 this water fountain designed by Charles Henry Driver. Felix Slade donated this after feeling sorry for the local children who, after playing in the gymnasium, had been taking their refreshment from the cab horse trough.

Slade was a fellow of the Society of Antiquaries and philanthropist who endowed three Slade Professorships of Fine Art at Oxford University and Cambridge University, and at University College London, here he also endowed scholarships, which formed the beginning of the Slade School of Art (founded 1871) in London

https://www.kenningtonpark.org/copy-of-history-1
Posted by Tim Baynes Art at 19:21 No comments:

Whenever that familiar blue label appears on any table I am transported back into Turkey and my first Efes Beer in 1986, and I have been enjoying this refreshing, light, malty beverage ever since.

This Efes appeared at my elbow whilst sitting in the Lebanese restaurant Yalla Yalla earlier this month.

A scroll down through the company’s enthusiastic Wikipedia entry tells that aside from its domestic market in Turkey, where it has 84% market share Efes exports to over 50 markets in Africa, Asia, Europe, North America, and Oceania. 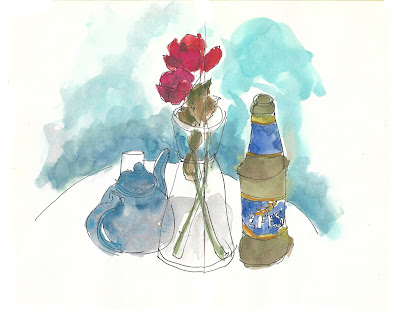 More on this fine brewer, which celebrates its 50th Anniversary, this year is here: https://en.wikipedia.org/wiki/Efes_Beverage_Group
Posted by Tim Baynes Art at 20:01 No comments:

THE TINWORTH FOUNTAIN: A SAD STORY 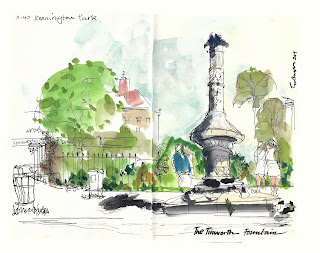 I was again in one of my favourite London places, Kennington Park over Easter with B.

We sat and drank our coffees looking at the Tinworth Fountain. Well what is left of it?

The fountain is just a stump now, but it was originally a large ornamental fountain made with unglazed, buff coloured terracotta by the local firm, Royal Doulton, for making garden ornaments.

It was donated by Henry Doulton, the sculptor George Tinworth.
​
Tinworth was born in Walworth in 1843, the son of a Wheelwright. Aged 18 he started evening classes at Lambeth School of Art, 3 years later he entered the Royal Academy and, in 1866, he exhibited his first piece at the RA. He then became resident sculptor at Royal Doulton’s Lambeth factory.​

This piece now stands by one of the park entrances on the Kennington Road. The story is that it was bomb damaged in WW2. The bowl was removed and used elsewhere as a jardinière, so it ceased to be a fountain, the sculpture was lost to vandalism in 1981. It was used as air rifle target practice from the Kennington Park Estate!

There are some rather botched concrete repairs and specialists have advised that cleaning might do more harm than good. Let’s hope so.

All this information is gathered from https://www.kenningtonpark.org
This is the wonderful website of The Friends of Kennington Park.
Posted by Tim Baynes Art at 19:31 No comments: 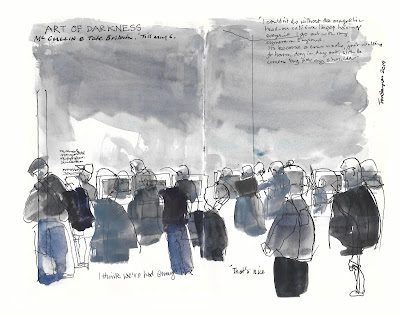 ART OF DARKNESS
Well, the Tate Britain show DON McCULLIN enabled many people to get close to the work of one of the most compelling photographers of modern times. Many was the operative word, all ten rooms were packed with people.

Each piece was printed to give a feel of despair and hopelessness. From his early work in London in the early ‘60’s, right through to the pictures taken in Vietnam, Biafra, Congo, Cyprus, Beirut and Iraq there was this blackness.  And it’s shadow was cast over more recent work, landscapes and still life.

An important exhibition and at the end of it ones feelings might be characterised with one comment I over heard.
A man to his wife:

“Come along dear, I think we’ve had enough”
Posted by Tim Baynes Art at 19:26 No comments:

A small study of butternut squash, complete in oil pastel.
Oil pastels are a delightfully creamy medium in which to work, easy to blend with rich colours.
Posted by Tim Baynes Art at 19:25 No comments: 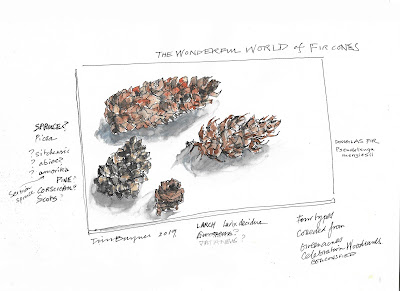 Although the woods hereabouts are bursting into new leaf the woodland floor is strewn with conifer cones.

Walking in the GreenAcres Chiltern park, seventy two acres of lovely trees, deciduous and conifers they are easy to collect

So I chose some fir cones, these 'fruit' of conifers, attempted to identify them using my copy of  Know Your Conifers   Forestry Commission Booklet No. 15 published in 1970.

A have handed in a copy of my identification drawing to Craig, one of the GreenAcres rangers, to mark my 'homework'.  I await the results.
Posted by Tim Baynes Art at 19:21 No comments: