A SKETCH FROM KERRY

I persuaded my dear friend, the violinist Jonathan Evans Jones,
to write this for us...

In June of 2000 I came to Co Kerry on a week’s holiday. It was a part of the world I had long wanted to visit despite knowing very little about its topography and history. The Ring of Kerry- yes it certainly had a ring about it. At the end of that week, a week of enchantment if not unalloyed good weather, I found myself buying a remote farmhouse in need of a bit of TLC, going for a knockdown price, up a mountain on the edge of the Killarney National Park.

The rest, as they say, is history; sometimes tortuous, sometimes stressful and often expensive. In 2008, we got a bit carried away with an extension project and doubled the footprint of the original house, at the same time installing a ground-source heat pump,12 meters of solar panelling and sinking a well. Our water had previously and unreliably come from pipes in the mountain streams above the house.

So much for the nuts and bolts. My wife Lorena has often described the Kerry house as our lungs. You could equally use words like health spa, retreat, refuge. We have been holed up here now for 6 months weathering the meteorological storms and the storm of the pandemic. There really couldn't be a better place to be.

You cannot divorce the experience of being in our mountain house from the extraordinary habitat in which it nestles. Context changes everything. I often lie in bed at night listening to the wind, fresh off the Atlantic, rushing through the conifers that surround us, or on calm days, with rapt concentration, I’m aware of that rare thing, an almost absolute silence interrupted only by the bleat of sheep in the fields.

It is possible and desirable, to actively listen to silence here; it is much more than the absence of sound.The changing light and weather create spectacles in the landscape beyond the scope of the most vivid diorama. I step outside in the morning to the sound of the brook making its way from Mangerton mountain above to the Roughty valley below, sometimes a soothing gurgle but more often a raging, confined torrent. Franz Schubert would have loved it. William Wordsworth too of course.

We are located almost as far West as you can travel in Europe without dropping off into the ocean, near a designated UNESCO Dark Sky Reserve. On clear, crisp nights the canopy above our heads treats us to our very own planetarium show. Mars has been particularly obliging recently. Take a boat and row two thousand miles due West, if that were possible, and you would make landfall in Newfoundland. Over The Pond the word ‘awesome’ takes on a rather general and diluted meaning through careless overuse, but here in rural Kerry, (practically a tautology of course as Kerry is almost all mountain, pasture and river), where the natural world can surprise and inspire at any time of day or night, and in all seasons, awesome, in the old-fashioned sense, feels like the right word to use.

"We do not claim to have reached perfection...

At the Eleventh Annual Assembly in 1915, the General Overseer stated, in his annual address, "We do not claim to have reached perfection; we are only searching for it.”

Committed to the sanctity of the marriage bond and the importance of strong, loving Christian families the Church of God of Prophecy enjoys a membership of over 1,500,000.

The church’s particular interpretation of the teachings (primarily from the New Testament) were originally introduced in a series of 29 sermons delivered on the Voice of Salvation radio program by M. A. Tomlinson, several doctrinal beliefs of the church became summarised by the 29 Prominent Teachings.

Well worth a watch is their Television Ministry, also called the Voice of Salvation. It is an excellent outreach and ministry with Pastor Billy Wilson ENJOY IT HERE…  https://worldimpact.tv/shows/authentic-love/

For locals we can go to COGOP, a natty acronym, here https://www.cogop-slough.com to enjoy their services. 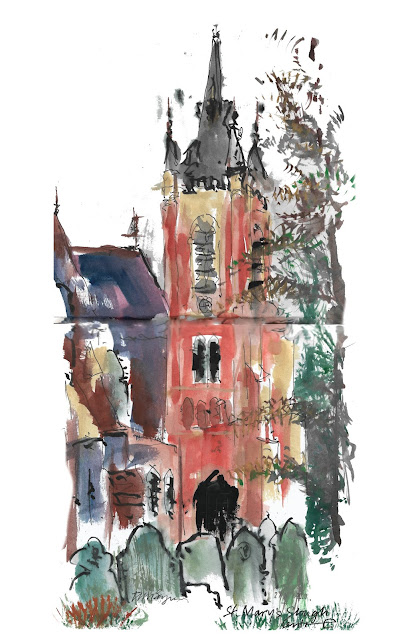 Peter Mary and Laurence  - three gems in the modern parish of Upton-cum-Chalvey, all in a row and it is five minutes on a bike between each. Which is what we did, entering Slough on the south side from the Jubilee River.

St Mary: The church of St Laurence had by1830 fallen into such disrepair.

Hey we need a new church the people cried

Found was four acres of land on the edge of the ancient village of Upton, between Church Street and Windsor Road. Just south of Slough’s High Street.

Inside and out this was to be testament to Slough’s growing status as a flourishing industrial town.

Oldrid worked from 1875 through to 1913 to finish St Mary’s. The final touch was the spire in 1913. This was bash and build as most of it was constructed around a Georgian confection.

St Mary’s West Window (1915), commissioned by Mary Ellen Elliman, sister of the church’s benefactor James Elliman.  The window was created by the Jewish artist Alfred Wolmark, and considered ground breaking and daring for its time, it inspired John Piper’s design for the windows of Coventry Cathedral*.

There’s more! East window dates back to 1889 and depicts Christ in glory with the twelve apostles. Each panel has a traditional medieval canopy, and each apostle is shown with two guardian angels with Kempe’s distinctive peacock feathered wings. Inside this church is a ‘must see’!

All three churches were closed, no surprises there then, meaning repeat visits post-Covid, are necessary. Included with this are links to the full history of each church. I say a BIG thank-you to each web site.

All three churches are another great reason to spend time in Slough.

*Coventry is City of Culture 2021 and Piper’s windows in the Cathedral are breath taking and have to be seen.

Peter Mary and Laurence  - three gems in the modern parish of Upton-cum-Chalvey, all in a row and it is five minutes on a bike between each. Which is what we did entering Slough on the south side from the Jubilee River.

St. Peter's Church Chalvey, because we are getting tight on space:

It’s the 1850s, space in St. Mary and St. Laurence's was insufficient to meet the needs of the expanding population of Slough; services in Chalvey were held in a schoolroom.

CROWD FUNDED:  The congregations’ modest weekly subscriptions were helped by an appeal to which Queen Victoria gave £100.

Plans for the church were drawn up by G.E. Street, an uber-church architect, and the contract was given to G. Harley of Slough. Many of the windows were the work of C.E. Kempe. (A stained glass top banana)  The first stone was laid in July 1860 and the church was consecrated on 7th September 1861.

Saint Laurence's Church is the oldest building in Slough.

In the twelfth century the wooden parish church of Upton was replaced with a flint building. Tower and outside walls of the Norman building form part of the present church.

INSIDE THERE IS two other Norman features survive: the ancient baptismal font, and a Piscina. During the reformation, many of the ancient decorations were mutilated. A thirteenth century Italian allegorical image of the Trinity survived and was reassembled during the restoration of the church.

Dereliction and Restoration: By the early nineteenth century the church had fallen into such disrepair that it was decided to build a new church, Saint Mary’s, in the town centre. A local farmer who secured the outside walls and tower saved the Norman building from demolition. Saint Laurence’s was restored 1850-1851 and rededicated on 2 December 1851.

A CAFE! EVERY MODERN CHURCH SHOULD HAVE ONE

In Spring 2021 The Dove Café is to be opened, if £70,000 is raised via one-off donations, regular giving or loans are secured.

The new God promotes ‘coffee and kindness being the perfect blend in a place for all, at the heart of the community’.

This all part of a scheme that includes a new attractive entrance to the church, glass panels to open the place up, more parking, a patio garden. There are numerous other aspects to the scheme!  The cafe is inside the church itself and the promotional leaflet promises ‘highly trained baristas!

Let us hope that A N Wilson’s piece* in The Times ‘Church shepherds have lost their flocks - The Archbishop of Wokeness Welby and the equally inept Nichols are not leaders that the faithful deserve’ does not come to pass otherwise the new cafe might not be too busy.

TAKE A WALK IN THE PARK

Wonderful! And another good reason to love Slough. Kennedy Park boasts an outdoor gym, play logs and a lookout.  We enjoyed looking out from the lookout. To the south one could almost see Windsor Castle. Certainly it's possible to enjoy a great view of Slough Power Station and the menacing flat roofs of the data warehouses on the Slough Trading Estate.

This is part of Britwell, a residential area immediately north of the Slough Trading Estate.  In 2013-14 there was a deal of controversy about the development of this area. Slough Borough Council were gung ho for more houses and Countryside Properties sniffing and opening said game on.

Although currently the new Community Centre (part of the deal) is closed (Covid) the park is open.  Careful though, Sam’s Store Drinks*, is close to one entrance and does attract drivers with a cavalier disposition to other road users, pedestrians and cyclists.

I continue to promote, extol, praise and borrow from http://www.postcards-from-slough.co.uk -  the late Gary Flint’s compendium of facts and inspiration about Slough and around and about.