In another one of my jaunts with Rosie, across the border into Berkshire, we alighted on Sonning on Thames. It was a super sunny day to mooch round St Andrews church.

Parking was a conundrum so I begged permission to park in the area next to the vicarage. The Revd. Jamie Taylor (I presumed) answered the vicarage door and said of course.

“The church is open by the way he added”.

Joy of joys, for we had not been inside a church for twelve weeks so this was a much-missed treat.

St Andrews Sonning actually opened for business around 900 AD and became one of the twin Cathedrals of the Bishop of Salisbury. It was a good call; three of Sonning's medieval bishops achieved Sainthood.

Now inside the church is it full of lovely Victorian fancies.

Hugh Pearson became vicar of Sonning in 1841. He found the church in a bit of a mess and set about to fix it up. With the drive and enthusiasm of Kevin McCloud in Grand Designs. The good reverend pulled in a good architect.

In 1852 Henry Woodyer led the church’s restoration. Woodyer, architect and pupil of William Butterfield (Butterfield ‘did’ All Saints Margaret Street in London which is simply fab. Woodyer was also a disciple of A. W. N. Pugin sometimes referred to as God’s Architect.

Off came the roof and the height of the Nave was raised; any of the arches where repaired and then most of the windows where replaced.

Robert Palmer (MP) paid for the majority of the work. Mr Palmer liked a good rebuild having pulled down and rebuilt Holme Park round the corner.

I did miss the famous Rich Monument dedicated to Sir Thomas Rich who was buried in the vault below in 1667. The monument came in to a lot of flak when erected; The Ecclesiologist magazine described it as ‘the vilest paganism imaginable’ It appeared that sad putti and vast urns where not the writer’s thing. Monument has been removed to beneath the tower where it can be viewed through the curtained grill.

There is a imaginative portrayal of the Church’s history (from which I have immoderately borrowed) here http://sonningparish.org.uk/parish-history/

There is an almost triangle of fields, woodlands and polite roads bounded by the A4, M4 and A404 in East Berkshire, just west of Maidenhead.
I first discovered this area on a frosty December day last year. Last week sought it out once more, for a churching jaunt.
I was accompanied by puppy, sketchbook and my newly acquired Pevsner  - The Buildings of England: Berkshire.
First call was paid to St. Lawrence church in the village of Waltham St Lawrence.
You enter under a huge yew tree. The place was full of peace and perhaps the promise of rain.Of course the church was closed and so a thorough inspection outside revealed much flint and stone although Norman origins can be enjoyed. Inside is mostly Victorian we gather. I made a drawing of what I thought must be the vestry window.
Leaving the church to your left is the Bell Inn with C14 timber framing and a farm house to your right. There is much Elizabethan and Jacobean brickwork adorning the houses throughout the village.
A couple of miles west, towards Twyford and we are in Ruscombe and the delightful St. James Church.
St James'  has an impressive brick tower, C17.
Inside, so Pevsner's inventory suggests, there are many marvels we can enjoy some other time: These include some restored paintings, C13 and restored in the late C19.
Both St. James and St.Lawrence are set in peaceful church yards where gravestones proudly welcome you to sit and ponder.
Posted by Tim Baynes Art at 19:57 No comments:

Having a few hours to go churching in the Cookham area I started at Cookham Dean.

St John the Baptist was built in the 1840s at the behest of the vicar of Cookham (down the hill and on the Thames) who saw the situation in Cookham Dean as where “ignorance and immorality had prevailed for some time past”.

Doors opened to welcome the souls of Cookham Dean in 1843 into their church, which a contemporary account described as

‘A most satisfactory design; very simple, and yet not mean or starved; of unpretending but solemn character’.

Although closed now the church enjoys a good situation and pleasant atmosphere. From the churchyard there are magnificent views East across the Thames valley to Cliveden.

Ten minutes away is the church of St James the Less in Stubbings, in the parish of Burchetts Green.  This is where my Aunt and Uncle worshipped for many years and are buried in the graveyard behind the church; a lovely situation, deeply carpeted in ox eye daisies at the time of my visit.

Similar in style to Cookham Dean’s church I discovered afterwards they were both built by the same architect; Richard Cromwell Carpenter (1812-1855). Carpenter it turns out was a favourite amongst the Cambridge Camden Society founded in 1839 by undergraduate students at Cambridge to promote ‘the study of Gothic Architecture, and of Ecclesiastical Antiques.’ So Carpenter and his chums were part of the gargantuan Gothic Revival. 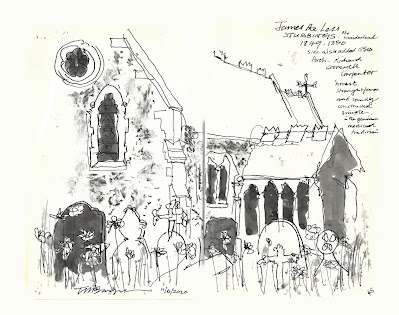 These two churches are lovely examples of how this movement could build in the Gothic style to create what is simple and decorative. As the guide to St James the Less describes

‘the honest straightforward, soundly constructed, simple building, which was in the genuine medieval tradition’

Excellent resources for these churches with my thanks 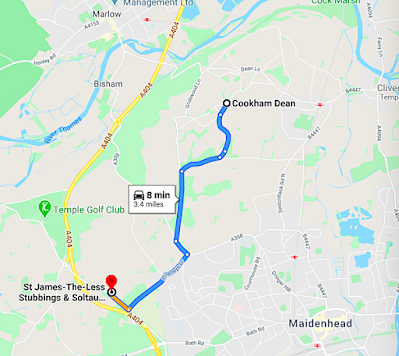 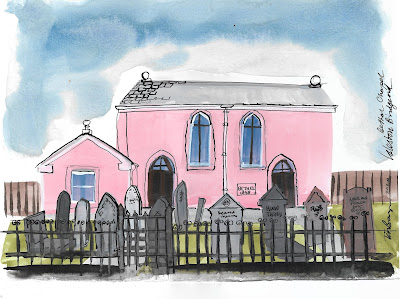 In looking at these wonderful buildings I try to determine what is special about each. And also looking at each chapel what is the overall  overall feeling it gives.

To my mind each fall into three styles, Plain and Simple, Piss-elegant and Neo-Classical wannabe’s.

What I have tried to do with these three pieces is start with broad areas of colour or colour wash, one has collage employed to create the entire work. 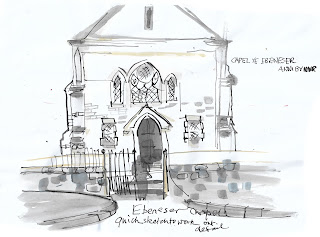 I am seeking to  move away from the 'draw lines and colour in' approach and think more about the shape and form of these wonderful buildings.

Each chapel is as particular as the people in who’s land they sit.

I find it hard to drive past a chapel in Wales without taking a photography of it loveliness!


My hero the artist John Piper Welsh chapels would be a constant subject for Piper, with his attentiveness towards them developing throughout his frequent visits to Wales. Of chapels Piper noted in 1974

“I do regard myself as a bit of a pioneer in pointing out these chapels are not the hideous things they used to be thought… They are uneducated, passionate, argumentative and contradictory, architecturally illiterate – which are their virtues”.

Extract from
CHURCH CRAWLING: JOHN PIPER, PHOTOGRAPHY AND WALES
A paper presented at the MONC Word and Image conference at National Library of Wales - September 2017
© Paul Cabuts 2017
Thank you Paul 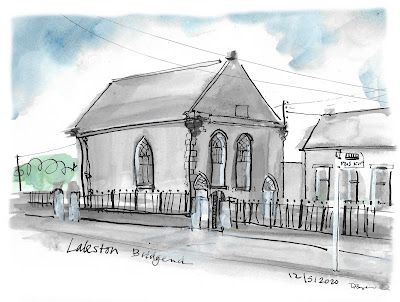 With all that is going on I was in two minds about posting this.

I made a few changes to the text and because two of PJ Lehrer’s most exciting photographs, all colour, angles, darks and neon; taken in Times Square, Well I immediately wanted to make drawings.

Brightly lit by huge billboards and advertisements, Times Square stretches between West 42 and 47th Streets. It is sometimes referred to the cross roads of the World. It is one of the busiest places; one hundred and thirty-one million people a year visit Times Square for is it is also the heart of the Broadway Theatre District.

Formerly known as Longacre Square, Times Square was renamed in 1904 after The New York Times moved its headquarters to the then newly erected Times Building. Nearly sixty years later the newspaper described the area as ‘the 'worst' in town’ for then and up until the 1990’s its go-go bars, sex shops, peep shows and adult theatres, became an infamous symbol of the city's decline.

Certainly the media circus is in town: ABC's Times Square Studios, where Good Morning America is made every day, competing Hershey's and M&M's stores are across the street from each other; and multiple multiplex theatres. You can enjoy a meal Ruby Foo's Chinese Restaurant; or the Bubba Gump Shrimp Company, or there is always Planet Hollywood.

CROWELL AND UP TO CHINNOR HILL

Off all the chocolates in the box Crowell Church in Buckinghamshire  is a sweet treat. Not withstanding that it is currently closed for Covid 19. Just off the B4009 motorway.


I met cousin Wendy, a distant cousin at this time, (Sorry)
nyway these trouble times with restrictions easing somewhat we met in the lovely churchyard of St Mary the Virgin.

Then up a lane, running west – east, and we were up on the Ridgeway!

Larks were high, the sun was slightly higher and those one the Ridgeway Path greeted and acknowledged one another as we passed by.

A mile or so in the direction of Ivinghoe Beacon, we were high over Chinnor and its new housing developments and across to the west, marvellous views to Thame, Long Crendon and into Oxfordshire.

Hawthorn, juniper scrub, yew, and whitebeam was alive the birdsong we saw red kites quartering the Reserve. A grand place to enjoy one’s sandwich before the walk back to Crowell.

Another treat, after the walk, was discovering https://astonrowant.wordpress.com/crowell-church/
A lovely website devoted to nearby Aston Rowant and the Spring Line Villages.
Posted by Tim Baynes Art at 19:18 No comments:

With lockdown virtual travel being all the rage I have been revisiting some of the material Trevor and I have created in www.curiouscoast.co.uk

Of late our time in on the Kent Coast, between Romney Marsh and Hythe, resulted in some great photography and drawings, which I now revisit and ponder.

The end of that jaunt was Hythe, which once an important Cinque Port Hythe and bustling harbour until the sea decided to take it away and silt up the harbour. Hythe was the home of the Mackeson Brewery until it closed in 1968. The first Mackeson Stout was brewed in 1909.

West Parade is the road parallel to the sea front and at its eastern end becomes Fisherman’s beach. Home to still a few fishing boats and the excellent fishmonger Griggs.

A bit further and the fisherman huts and paraphernalia are strewn across the beach.
Their lines and ropes, buckets and what have you providing local colour against the shingle.

The huts ring fence and appear to defiantly hold back the development of houses and flats behind.

The property company proclaims
Contemporary Beach-front Apartments, Houses & Villas - Life On The Water’s Edge
…Luxury two-bedroom ground floor apartment, the creation of Kentish Project Ltd having been designed by award winning architect Guy Hollaway. Set on the jaw dropping site at Fisherman's Beach this is a rare opportunity to live within a stone's throw away from the beach…. literally!”
Help To Buy Available - Help To Buy Price: £239,995

However fishing is very much alive and has move along the beach, Reports Fishing News
“Beach fishermen of Hastings (the largest land-based fleet in the UK) keep very active. The Stade, where they fish from, is popular with tourists, and their annual food festival gives them an opportunity to promote themselves.”