The View from a Hidden Glen: Part 1 - Turn across the A9 at a set of wheelie bins

Glen Bruar Lodge, near Blair Atholl in Perthshire is the home of dear friends Mike and Kate Colling. Mike returned there recently and shared this view. It is illustrated with drawings made when Sian and I were lucky enough to share this special place in 2017.

From the real world the view is dull as ditch water.

Heading north towards Inverness on the A9, some eight miles north of Pitlochry one turns across the carriage way at a set of wheelie bins parked at lay-by 43. But turn here and one is immediately down the rabbit hole. Or rather, up the rabbit hole. Straight up, literally straight up at a 25% gradient on very rough and ready road. But this is just an initiation test. A first bark with little bite behind it.

Crest the first brow and moor opens up ahead, dull russet after winters snows and winds have taken their toll. An honour guard of young stags greet us this late March afternoon, as the sun dips and shadows lengthen. Some still hold last years antlers, others have cast them early, and wander bare headed in search of nourishment to enable this year’s growth to replace the fallen set.

Press on three miles, gently climbing by the wide moor, and then, at the crest drop into our hidden glen. Another view, this time a realm of magic, clever contours unfolding views around each curve and dip. Snow holds still on our high peaks, and in the corries and gullies sheltered from the morning sun. Past the new hydro turbine house, and six miles of healing scars upon the moor. Six miles of buried pipe, politically correctly hidden from our ecosystems view. Hidden solely from them and us. A few hinds, a collection of coveys of grouse and the two luckiest people on God’s earth. And that is it for nine miles of unfolding glen. A thing of multi coloured and many-hued beauty.

One last corner on the track, that by this time clings to edge of sheer drop down to river 60 feet below, and home comes into view. The lodge, in perfect contrast to the glen, is slightly ugly. Not a carbuncle, but more an unfavoured child. It is, or rather was, white. Centuries of liming and whitewashing have laid layer upon layer of outer skin.

The last was applied in 1991 and so rather like Williams cuffs and collars the white has frayed at the edges and collected dirt. It is a military building, a little like a small child's fort. Two square turrets adorn either end, with a one-story central link between. When seen from above one realises just how higgledy piggeldy it is. It is a building that like the best stories has grown with the telling. Each passing generation it seems has added its own particular contribution. Inside it is scruffy and unloved, but very lovable. A central corridor that kinks as it descends the house. Each turret holds a child’s room, with hospital beds taken as mementoes from the war when Bruar and its castles played their role as hospital for the wounded returning from the front.

The bus station was completed in 2011 and features a striking, curved aluminium clad canopy designed by Bblur Architecture. Locals weren’t impressed and nicknamed it the Slug. Bblur, who is also responsible for the Curve, has taken the stylistic ‘language’ of the bus station and applied it across the street (the every busy A4)

It was a warm sunny day as I sat down to draw ‘the Slug’. As I did so a friendly bus driver looked over my shoulder and was more complementary about my drawing than my subject. Not as good as High Wycombe (bus station) he said and went on to list the poor Slug’s short comings, also referenced in Wikipedia: the absence of public lavatories, lack of adequate seating areas and lack of warm waiting areas. People say the shape of the building channels rainwater into the main waiting area. https://en.wikipedia.org/wiki/Heart_of_Slough

More upbeat was Matthew Bedward founding partner of Bblur who designed this shelter,

“We took the opportunity to significantly improve pedestrian permeability between the train station and the town centre. Our client tasked us to create a memorable front door for Slough. The form of the building derives from the idea of different wavelengths of light inspired by Astronomer Royal, William Herschel’s discovery of infra-red waves in 1800 while a resident of Slough.”

Nice one Matthew and Amy Freerson, editor-at-large for Dezeen magazine is equally enthusiastic:

It will create an identifiable place within Slough that is a celebration of public transport and is a memorable first and last impression of Slough.

For a well written and balance view head over to https://thebeautyoftransport.com/2015/10/21/a-tale-of-two-bus-stations-slough-uk/ Thebeautyoftransport is remarkable source of all things related to transport by Daniel Wright, a freelance transport writer. His blog is well worth a visit.

Discovering Daniel’s work was a bonus as I was pulling my tawdry piece together. Daniel describes his rich work as: ‘Transport design, transport architecture, and transport's influence on art and culture. Part travelogue, part history, all transport (but sometimes tangentially so)’.

A VIEW FROM THE SMOKED FISH STALL

Mike begins his view across the counter with some introductory words from Mark Riddaway, editor and publisher of Market Life,  about the purpose of Borough Market.

And goes on to add some observations of his  own..

" Borough is London's most famous market, it's a wonderfully chaotic place populated by a kaleidoscope cast of traders bound by a common thread - the ability to shine a light into the deep canyon that too often separates us from the source of our food.

In recent decades, the increasingly monolithic, impersonal nature of the British food industry has cut us off from the world of farmers, fishermen and cheesemakers......it's all too easy to presume that you're eating something pure and wholesome when really it's fifty percent ultra-processed rubbish and fifty percent marketing.

You can be gulled into thinking that all salmon is a bit slimy, that cheddar cheese is a dull, plasticised mass and that carrots don't taste of very much. And in extreme circumstances, as history has shown, you can be led to believe that you're eating British beef when you're actually eating Romanian horse."

Nowadays in the UK we tend to taste as much with our eyes as with our mouths.

An interesting experiment is to conduct a blind tasting of a variety of big supermarket "own label" products, say cheeses, and try to determine what they are through taste and texture alone. Is it cheese and if so what type, or is it actually ham?! Everything tastes pretty much the same and that's even before COVID.

Eat less, eat better and pay more for quality is where we should all be headed - a cultural shift in line with the priorities of our friends in Europe. Great food should not just happen in expensive restaurants, it can and should be a daily event at home.

A VIEW ACROSS A GARDEN IN MARBLEHEAD MA.

John Bonner, artist and filmmaker set me an interesting challenge when I approached him for a piece view for the  'View from' series. He said, "I'll describe the view in words and you can translate these words into a picture." "I'll send a photo after you've done the picture"

Here is the text and the photograph John sent afterwards later. By the way, do enjoy John's short films here

We both noticed it. At night. When the motion detector flood light is triggered by a rabbit. The fieldstone path leads from our back window to the wooden garden gate, set in a stone wall made by cattle farmers over a hundred years ago. Beyond is only the blackness of the forest. The flood is attached to our cedar-sided shed, on the left, and the area it illuminates, comprising the gate, the wall, and the path through the lawn, look uncannily like a stage set. Perhaps it’s the way the background appears to be black, but it’s as if the curtain has just risen, revealing a tableau lit by single light.

We find ourselves waiting for the actors to make their entrance. 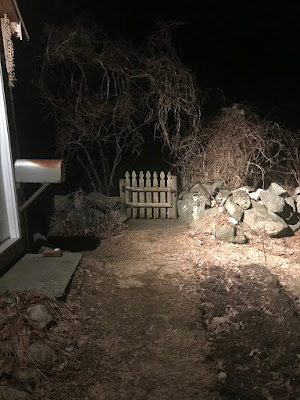 It’s entrance rather looks like your Gran’s radiogram has flown into the front of a glass and steel squidgy thing.
Slough like most exciting towns of today as its fair share of architectural novelties. The Curve a modern confection; glass steel and a curious floor plan. It squats at the junction of the A4 and the road south to Windsor. Slightly to the east cringes its neighbour, Our Lady Immaculate & St. Ethelbert, built in 1910.
The Curve, which opened in 2015, serves many functions, library information centre gathering place with lots of recreational activities. The £22m project is the heart of a £400m scheme to regenerate the town centre. This fearless initiative called the Heart of Slough, includes new homes, offices and improved transport facilities.
Named ‘Best Public Service Building’ at the Local Authority Building Control (LABC) excellence awards in March 2017, when the plans for The Curve were announced there was controversy.
Not all bad though: This delightful comment from Mahboob Sabar of Manor Park.

This is a crucial development and will no doubt help boost tourism to our lovely town. I have served the local community as a grocer for many years, watching the winds of change shape Slough into an international hub of commerce. We are fortunate to be living so close to Windsor and London, we too can take pride in our architecture! As an immigrant in the 1970's working on the shopfloor at the Mars factory, I ate my first Mar's bar taking satisfaction this was a home-grown product. Slough will always be close to my heart!