A BIT OF BAROQUE IN VILNIUS

I was in Vilnius for a week’s work and was able to carve out an afternoon to see some of the city’s important churches. This is capital of Lithuania with some of its city walls intact and people beetle about in boots and thick coats to keep out the cold (minus 8 most days) and snow flurries up and down the streets.Vilnius is very much a northern European place with its classical and baroque buildings mixed in with the orthodox ‘mushroom-doom’ minarets of the Russian times.

The city’s Cathedral was a lofty classic building with its plain warm grey interior and broad nave and narrow side aisles. Throughout my time here women would slip into the pews to make their devotions.  This idea of popping in to pray was a characteristic of each place I visited. One could easily imagine that it was a well planned as a tea break and as important. 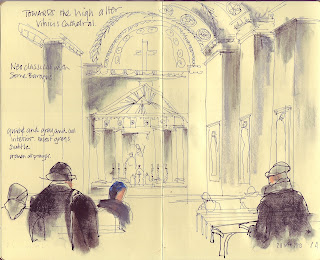 Napoleon when he conquered here wanted to take St Anne’s church back to Paris with him, so delighted with the place he was. It is a baroque ornament; its white interior and fading frescos are contradicted by some wonderful woodcarvings that are wrapped around each of the pillars that comprise calm nave.  I sat in silence and drew these flights of fancy and looking back on my efforts they seem just as momentary and my rest here.
Making my way through the University buildings and quads I at last gained access to most impressive baroque churches, the Church of St. John. The church is beautifully integrated into the

University’s architectural complex. I sat down to drawn representation of its tall façade, sitting on a step opposite and quickly froze.


Walking up through the city I eventually reached the Gate of Dawn where the walls of Vilnius are readily visible. In the sixteenth century city gates often contained religious objects intended to guard the city from attack and to bless travellers. The


tiny Chapel in the Gate of Dawn contains an icon of The Blessed Virgin Mary Mother of Mercy, said to have miraculous powers. As I sat of to the side of the rich alter and drew this jewel-box, people came and went, briefly
kneeling to make devotions to the Blessed Mother and supplicate for their own hopes and prayers.


From the Gate of Dawn I walked back to the hotel stopping again for another warming coffee. The delightful café’s are everywhere serving good espresso’s to thaw the artist’s hand; a lovely afternoon of baroque and
devotions.
Posted by Tim Baynes Art at 18:12 No comments: 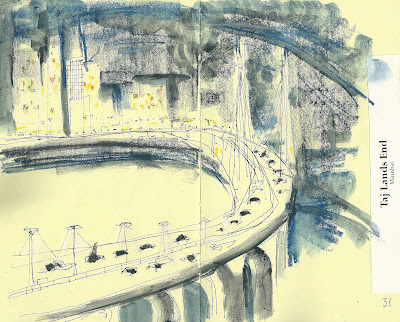 From Room 1842 in the Taj Hotel Lands End I am looking down, through the sunset on the steel cables of the Rajiv Gandhi Sea Link. From this distance the bridge’s cables look like the filaments of a spider’s web. Two hundred and sixty four cable stays from pylon towers four hundred feet high keep this bridge above the open seas. Each day forty thousand vehicles cross from West to South Mumbai. 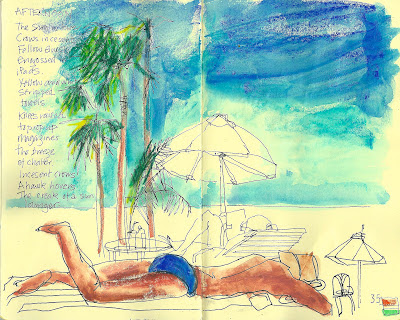 We landed in Bombay very late on Saturday evening and are installed in the hotel by midnight. A pleasant 32 degrees each day, we took Sunday as a day of rest after sorting out the
game plan for the assignments next day and Tuesday.


Relaxing by the pool I adjust my sun lounger to follow the sun’s gaze.  A lazy time interspersed with cool towels, bottles of water and fruit kebabs, all delivered to my bedside.

Monday evening we cross on the Sea Link Bridge and through the streets of the city to the Four Seasons. Here, thirty-four floors up, we enjoyed the night with a 360-degree view of 17 million people. Drinks and snacks in the Aer Bar. Later on the music switches to Ibiza circa 2011, a group of men, slim and tall in dark suits arrive to remind us that forty per cent of the countries income tax is created in Bombay. These bankers slither over this city and hardly leave a trail. 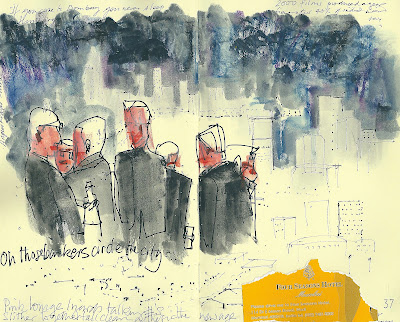 The assignment complete I head out on Tuesday evening, actually 02:45 Wednesday morning for the flight to get me into London for a workshop on Wednesday afternoon. The ride to Mumbai airport is through light traffic along another familiar airport route.

Bye Bye Bombay. Back soon.
Posted by Tim Baynes Art at 17:43 No comments:

THE THAMES PATH: ANOTHER GLORIOUS DAY

Second day, after a glorious deep sleep I looked out of the window on the sunny courtyard at the back of The Red Lion. It still looked cold. We made a hearty breakfast downstairs in the restaurant just off the bar. Everything on the menu appeared to be made on the premises or at just down the road.  Sausages, bacon, black pudding, eggs and warm toast; it all tasted so good.

We checked out, whilst Mike and Dave were sorting out luggage and cars I made a drawing of the Bar and its impressive stock of beers many of which were created in the small brewery just off the courtyard under my room.

10:35 There is ten miles ahead of us from Cricklade to Lechlade, the later marking the highest point of navigability on The Thames. Across or alongside broad fields the damage to crops by the heavy rains and flooding of recent months was clear to see. The Farming Programme (Radio4) later reported that Farmers were still figuring out whether to replant or leave fallow.

We saw twelve swans grazing in a field and they took off as we neared, to the next field and again as entered that field: the appeared as line of jet-fighter silhouettes against a pale March sky, the whoosh whoosh of their great wings.

13:45: The leg pain that had dogged me the day before set in early this second day. We were slightly less than halfway through the 10 miles. We agreed at Castle Eaton village to part company, farewells were made outside The Red Lion (another Red Lion). Mike and Dave headed off.

I found my way to the local church, St Mary’s, with its two Norman doorways. The place was looked so I was denied at look at the English Gothic. This delightful place was restored by architect William Butterfield (known for Keble College, Oxford and All Saints Margret Street). He added a distinctive corbelled bellcote on the roof mid-way along the roof – quite strange!

Back to The Red Lion and a pint and the landlady ordered me a taxi, which turned up after I had warmed myself in front of a huge fire.

14:40 Eventually I arrived in Lechlade and sat to make a drawing of the Half’ Penny Bridge, the toll bridge of the town. It had turned dull and the temperature was just above freezing. I repaired to The Tea Chest for warmth and coffee. I had just settled down and in walked the boys and ordered the same. The first stretch completed the next stretch Lechlade to Oxford is contemplated by boat.

A THAMES WALK: DO SHEEP BITE?


Well set off from the car on this Monday morning, walking across a field towards the Head of the Thames. We were about bout 6 miles south of Cirencester in Gloucestershire. This is the point were the tiny spring breaks through the ground and 187 miles later becomes the river that pours through the Thames Barrier.

Mike, Dave and I have set out to walk, cycle or by boat get down to the Thames Barrier downstream of central London.

A cold March morning, sun breaking through the cloud. Across fields we tramp to locate a block of stone some five feet high and the signpost that marks the Thames Footpath.

Onward we go, across fields, a main road, and then into another water meadow and as if from nowhere there is water. We are about a mile into our 12-mile mission for the day. This will now take us along the bank of the stream, which soon becomes a credible river.

Past farms in honey coloured Cotswold stone, under tiny footbridges and along side meadows and trees and the occasional stand of electricity pylons that disappear into the distance.

We'd set off at 10:40, touched the start point at 11:00 and by 14:00 were in the village of Ashton Keynes. The pub, which was much contemplated by us, was closed so the local village shop provided the place for a Cornish pasty, a bottle of beer and some Hob Nob biscuits for later.

The river appears to disappear into a vast expanse of the Cotswold Water Park. A desolate collection of lakes and ponds that appear to serve some recreational purpose on days that is not as cold as today.  The path is easy to follow but the Thames is somewhere else.

We arrive in Cricklade town at 17:35 and make our way to The Red Lion for the evening. The delight of removing our boots for the day - we are quite tired and my leg is playing up.  Hot baths all round, the delicious beer, made on the premises and sausage and mash for supper.

A successful day; the pub is packed with people enjoying themselves as we are.
At 21:00 I fall a sleep in my beer and the lads suggest we all retire to bed. We agree on a time for breakfast before we head up to our rooms.
Posted by Tim Baynes Art at 11:26 No comments: