On one of my weekly walks with Trevor the Architect, I asked him who were his architect heroes where, when he was at architects’ school.  He confessed a mild infatuation with Michael Graves an American architect and darling of the§ Post Modern movement over in the USA.

Postmodern architecture was a push back on the Modernist austerity and lack of variety. The impact was wild with building embellished with all kinds of motifs and shapes and plans, Gothic, classical and Gotham City style excrescences.

After poking around a bit on this movement I began to realise why I was so fascinated by the buildings in Atlanta, when I visited for work in 2015 2016.

Tall towers topped with all kinds of fanciful knobbly bits and malls in all shades of pinks, browns and ochre.

More research revealed that Graves designed two buildings in Atlanta during his career, with Ten Peachtree Place in the heart of Midtown representing a restrained postmodernism that provides a unique feature within the urban fabric around Midtown MARTA Station.

Golly gosh it great to be back on the bus!

I had to meet some chums in Amersham, discovered the best bus service ever.

It whistled me from Beaconsfield to Amersham in no time at all and all the bus stops are so conveniently located. In flight service was great and the pilot polite and welcoming.

Repeating the experience next Friday. 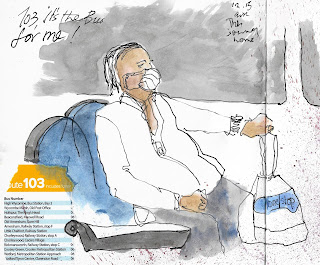 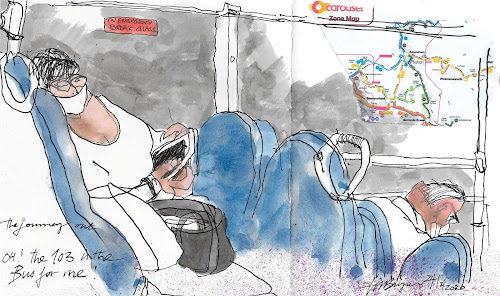 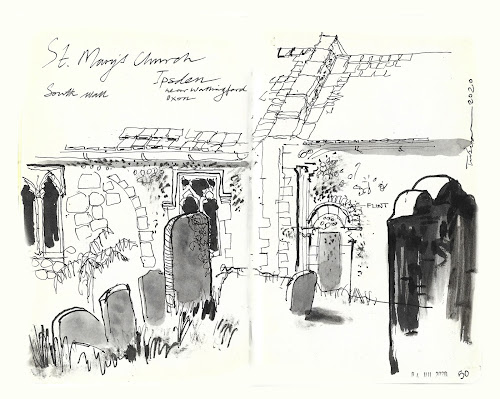 The locals call this part of the county, east of the Thames near Wallingford, the South Oxfordshire plain, lightly wooded and full of wide fields that drift up from the river.

It is the area where two special churches are to be found.

ST MARY THE VIRGIN, IPSDEN, A TALE OF THREE CHURCHES

Tradition has it that the first church in Ipsden was a small chapel on Berins Hill, about 2 miles east of the present church, built by St Birinus when he came from Rome in AD 634 to convert the Saxon peoples of South Oxfordshire.

The second Ipsden church was in a field south. It fell into disrepair in the 12th century and was eventually demolished.

The materials from church two were hauled up the road to repair and enlarge the present church. It was much smaller and an upland chapel for the adjoining parish of North Stoke. However St Marys eventually became Ipsden Parish Church.

Sadly the church was closed. For now we could, even on a grey windy day, enjoy the church, its windows, tracery and flint work, surrounded by here and there by interesting brickwork.

Originally Saxon: William the Conqueror crossed the Thames at Wallingford with the help of a Saxon lord, Wigod; his daughter married a Norman Baron. Stability was brought to the area after the Danes had roamed the land for four hundred years

The place unique in as much as it is the only church whose churchyard has part of the Ridgeway running through it.

The Saxon church is little to be seen, a Norman took its place with its Early English chancel and an East window in the Decorated style. Like Ipsden, there are wall paintings to enjoy. If one could go inside.

However there is much to enjoy outside, a C15 tiled porch and a nicely kept churchyard and a lychgate made out of timbers from the old bridge at Goring! 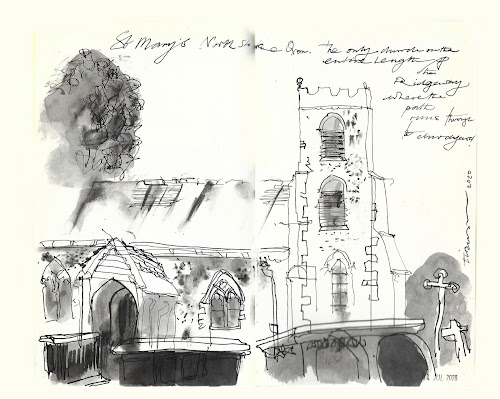 Add in a constant stream of walkers and there was quite a festive air that Saturday afternoon and both churches are earmarked for a return visit.
Posted by Tim Baynes Art at 19:30 No comments:

Right now any picture of crowded beach draws chagrin from many quarters.

The current issue of Vanity Fair carried a detailed piece on the push me pull you nature of the current US Administration over Covid-19. The magazine’s report was centred on the to’ings and fro’ings in the March April period. 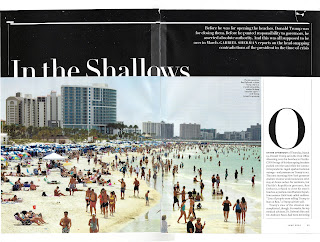 This editorial is particular prescient, in early July in the USA over 40,000 cases a day are being recorded. We can only hope this reduces and improves.

VF article (opening spread shown here) carried a remarkable picture of a beach in Miami. Seeing it, I was compelled to use it as the basis for a painting. The photograph is a great composition and as much fun to paint as those folk were having on the beach. 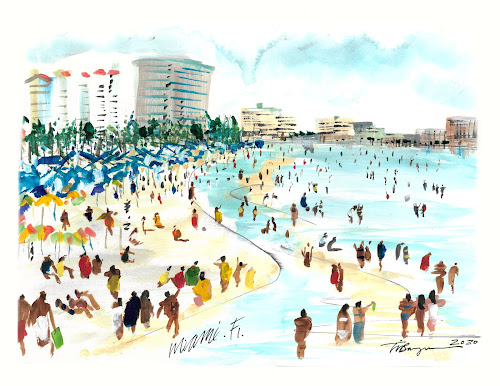 Hopefully my piece is not read as artistic ambulance chasing.

Over recent times I have be casting around files of photos as inspiration for paintings. In 2018 we had nine days travelling through Romania.

One of the high spots each day, when entering the town or city in which we’d spend the night, was seeing the apartment blocks towering above us. I hurried took photos and squealed with delight.

My passionate appreciation of architecture built during the regime of Nicolae Ceauşescu (1965–1989) probably puts me in a majority of one.  However I love the symmetry, curves and haphazard nature of these schemes heighted by when the sun hits them.

Ceauşescu had been to North Korea and China in 1971 and was impressed with the huge housing blocks that were constructed on ground levelled to make way for dormitory neighbourhoods.

The dictator’s bombast and swagger reached its zenith in the building of the 'Palace of the People' now post-revolution renamed the Palace of the Parliament which we visited, huge beyond belief.

In another one of my jaunts with Rosie, across the border into Berkshire, we alighted on Sonning on Thames. It was a super sunny day to mooch round St Andrews church.

Parking was a conundrum so I begged permission to park in the area next to the vicarage. The Revd. Jamie Taylor (I presumed) answered the vicarage door and said of course.

“The church is open by the way he added”.

Joy of joys, for we had not been inside a church for twelve weeks so this was a much-missed treat.

St Andrews Sonning actually opened for business around 900 AD and became one of the twin Cathedrals of the Bishop of Salisbury. It was a good call; three of Sonning's medieval bishops achieved Sainthood.

Now inside the church is it full of lovely Victorian fancies.

Hugh Pearson became vicar of Sonning in 1841. He found the church in a bit of a mess and set about to fix it up. With the drive and enthusiasm of Kevin McCloud in Grand Designs. The good reverend pulled in a good architect.

In 1852 Henry Woodyer led the church’s restoration. Woodyer, architect and pupil of William Butterfield (Butterfield ‘did’ All Saints Margaret Street in London which is simply fab. Woodyer was also a disciple of A. W. N. Pugin sometimes referred to as God’s Architect.

Off came the roof and the height of the Nave was raised; any of the arches where repaired and then most of the windows where replaced.

Robert Palmer (MP) paid for the majority of the work. Mr Palmer liked a good rebuild having pulled down and rebuilt Holme Park round the corner.

I did miss the famous Rich Monument dedicated to Sir Thomas Rich who was buried in the vault below in 1667. The monument came in to a lot of flak when erected; The Ecclesiologist magazine described it as ‘the vilest paganism imaginable’ It appeared that sad putti and vast urns where not the writer’s thing. Monument has been removed to beneath the tower where it can be viewed through the curtained grill.

There is a imaginative portrayal of the Church’s history (from which I have immoderately borrowed) here http://sonningparish.org.uk/parish-history/