George (Harvey) and I went back and forth on mail as he was keen to buy my modest volume of drawings. Paypal and credit cards did not work for us for different reasons but we agreed I would send the book and then he would send the dollars in a plain envelope.

Hopefully Federal and British currency laws have not been violated :)

The money recently arrived, in delightful envelope (far from plain!) and a bonus, a delightful watercolour study (centre of the picture below) by George!

The power of art and publishing!
(Thank you Mr Harvey) 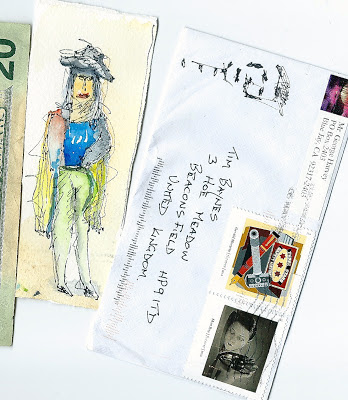 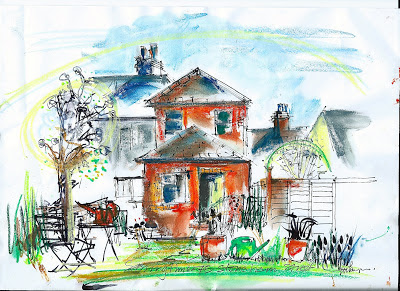 We sit right at the top of the garden,
looking back towards the house,
Warm red brickwork.

A breeze stirs the Apple tree, recently pruned to applause from the next-door neighbour.

A piece of ground to accommodate the new garden shed has been prepared as like the alter table for Communion, neat, orderly.

Everywhere herbaceous plants are peeking through or establishing their presence,
Nothing will be disturbed this year until each plant’s variety is established.

The house is drowsy dark inside with sunlight to cottage windows spotlighting books and music.

Ginger cat leaps up on to a garden table and rubs herself against a watering can.

Next day, April 14, is sunny and the temperature will reach 22 degrees C by lunchtime. The Thames appears to hang a left and flows northeast before it drops down southeast to Oxford’s spires, a twelve-mile stretch to Godstow Bridge.
More locks, fewer bridges. 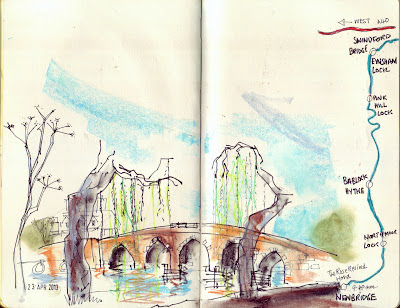 I failed to meet the boys at Northmoor lock having got stuck on a bridle path in a dark wood and having struggled free fell into the arms of a footpath with steep and scary hedges. The next planned RVP was also denied me as the road down to Badlock Hythe an ancient Roman ford, was closed to cycles and cars.
At pretty Pinkhill Lock I arrived here well before Mike and Dave. I shared our chocolate confection and a conversation with the lock keeper who welcomed a break from the last of his spring-cleaning painting. 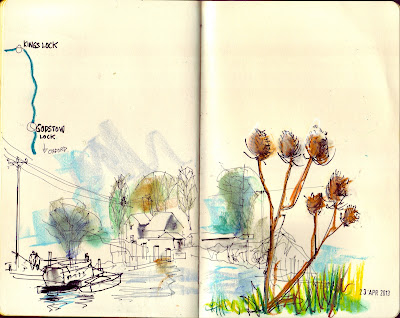 We spoke of floods and fishing and pubs. He singled out The Trout Inn (our place of supper last night) as being once great but now not a favourite amongst Angler. I played down our wonderful evening at The Trout for fear of being viewed a ponce. Mike and Dave arrive at Pinkhill to share chocolate and we are recommended to lunch at The Talbot Inn. For me this is reached by paying a toll on Swindford Bridge, 5p.
We enjoyed sandwiches at The Talbot; each one was not so much a ‘doorstep’ more a complete flight of stairs.
I drive onto Godstow Lock and peddle back across a broad meadow to link up at Kings Lock. The three of us walk back downstream to Godstow Bridge. Now we are little over three miles from Oxford and look across the fields to the city. The hot sun has brought out more walkers and families, one couple lounge by a bend in the river, he in bathing costume, preparing for a dip. 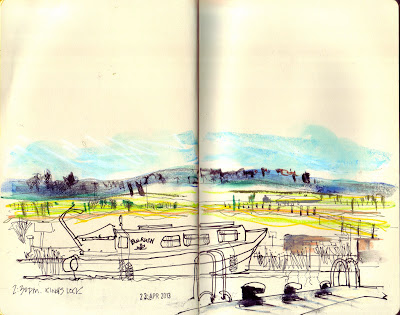 We taking in this festive summer scene and discuss the next leg of our journey, for May will see us back on this spot to resume our journey down The Thames.
Posted by Tim Baynes Art at 19:52 No comments:

Five weeks on; no longer is there a wind that freezes one’s laces to one’s boots. Today there is a blue sky with occasional greys for the beginning of a twenty-eight mile stretch across a Monday and Tuesday. My back trouble again precludes the full walk. I flit like a gadfly between locks and bridges to share water and Sian’s chocolate confections and white chocolate cookies with Dave and Mike across these next two days.
We start at Lechlade, having dropped one car at our mid-point Newbridge, 16 miles down stream. The boys set off. I make a drawing of St Lawrence Church who’s spire spikes the sky, visible for miles.
Flat broad river.
Along this stretch of the river is a chain of concrete pillboxes erected in 1940 as a final defense to stop invading armies reaching the British Midlands. Known as “Stopline Red,” they were fortunately not needed. 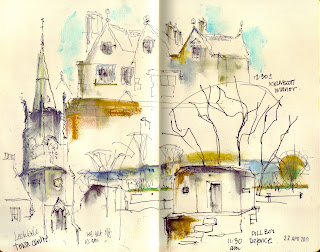 Downstream I meet up with Dave and Mike outside Kelmscott House the former home of William Morris. He would row his family and friends from his house in Hammersmith, a good distance.
Radcot Bridge and we have our lunch at the Swan Hotel. We share egg sandwiches with a flock of greed ducks. Radcot Bridge in golden 12century stone, its gothic arches against a leaden sky.
A cloudy afternoon and we agree to meet at Rushy Lock. I cycle to this point and then, with the boys, turn back and downstream to Tadpole Bridge. Afternoon tea at The Trout Inn 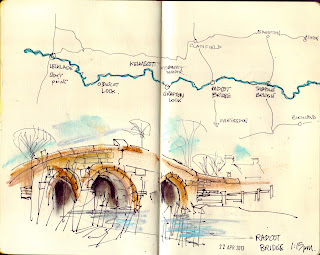 Side Note: Although we got caught eating our biscuits at the bar of the Trout Inn (over our coffee) we are allowed back in at suppertime for an excellent meal (watercress soup and battered haddock for me) punctuated with bar staff banter.
Just before Newbridge the river takes on a secretive air as it runs through the trees in Chimney Meadows to Shifford Weir were once King Alfred established his Court.
Newbridge, and its bridge are only fifty years younger than Radcot. Both were built by monks on the orders of King John in order to improve communications between the wool towns in the south of England, and the Cotswold farms.  Here the Windrush River joins from the north, literally in a rush. In earlier times along this tributary the quarries sent stone to build Oxford Colleges and further downstream to contribute to the fabric of St Paul’s Cathedral. 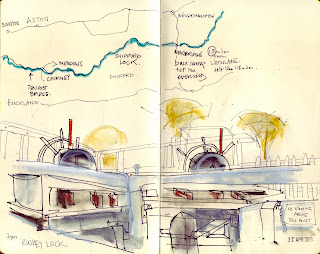 All that remains is a tall square tower and broad buttresses.
A religious house since 927 AD
Now an Abbey Church,
Honey-coloured stone.
I entered as bell ringers began their Peel of eight bells,
A three hour requiem for one of their number, recently deceased

Outside
Afternoon sun underlines the rhythm of Romanesque
Clearly evident on the southeast façade. 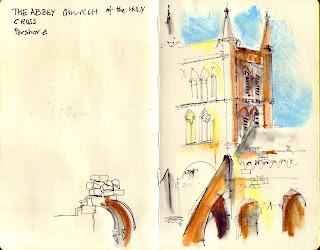 Inside,
A noble knight in marble,
At rest in the south transept,
His cloak and armour clear for us to touch. 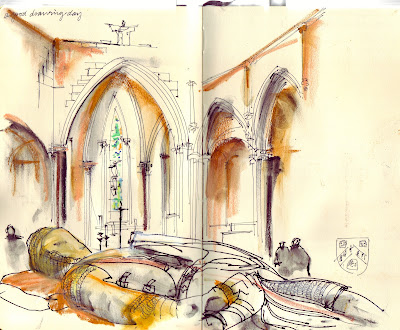