Another trip into London (pre T4 lockdown) in furtherance of my autodidact approach to modern architecture; two buildings were on the menu.

First was No1 Poultry, across from the Royal Exchange and looking like a nice slice of Battenberg cake, then onto Lloyds of London. This second stop looked like something from Asimov’s Caves of Steel, published in Galaxy Magazine thirty three years before the building was completed in 1986.

No 1Poultry, this was a triumph of tenancy; Peter Palumbo tried for twenty-five years to develop this site. He finally got the go ahead for architects Stirling and Wilford to build an obsessively decorated post-modern confection. Sadly James Stirling (Tate Britain, Clore Galleries extension and the Neue Staatsgalerie in Stuttgart) died before No.1 Poultry was completed five years later.

Lloyds of London, the inside out building, was the triumph of Richard Rogers. It took eight years to build which is quite a long time by standards of the day. One architect friend commented, “They were probably making it up as they went along”.

Standing across the street and looking up at the Lloyds Building is an exciting prospect.  It has been the location for sixteen films including Guardians of the Galaxy (2014).

Architecture fiends and building crawlers should download the an app called London Architecture Guide from https://www.architecturefoundation.org.uk/londonguide it is simple to use and reaches out to outskirts of the city. Great for planning a tour of if you find yourself with a little time to mooch around just tap current location!

A BOX OF DELIGHTS IN MIDDLESEX

With a year of being encouraged to travel less the Curious Coast team have journeyed closer to home, still in the spirit of being ‘curious’.

We went to a remarkable church, All Saints Hanworth. Consecrated in 1957, All Saints is a box of delights most of which was created by Nugent Cachemaille-Day, an architect widely recognised as designing some of the most revolutionary 20th-century churches in the UK.

And what a joy for we were lucky to be welcomed by Fr. Sergiy Diduk who took great pains to ensure our visit was special.  Its West Door on the busy Uxbridge Road welcomes you into a treasure house of stained glass, sculpture, carvings and woodwork. In the main body of All Saints huge concrete spans support a roof and lantern of stained glass and give the place huge space and presence, a concrete apse decorated in gold with seraphim images.

And there is countless detail to discover for example Cashemaille-Day fashioned a remarkable font through his rummaging in junk shops. The result is a 19c copy of a 14c North German image of The Virgin.

Discover more about the Architect here http://www.modernism-in-metroland.co.uk/blog/the-bricks-of-faith-the-churches-of-nf-cachemaille-day a remarkable resource of Modernist buildings and places.

And the delights of All Saints here http://www.allsaintshanworth.com

From the church's guide produced in 2017

A couple of weeks ago, when looking for something else, I came across a cache of photographs I had taken when on visits to Japan, 2005 – 2007.  I was excited beyond measure, connecting with these images and immediately scuttled off to make drawings and paintings.

Japan the last truly foreign country and Tokyo is a city to match. Truth be told, it is the only place I really wish to return one day.

Last year writers Michael Ryan and Luke Burgess put it well in their book Only In Tokyo. Link

‘If Japan is enigmatic, then Tokyo is the heart of that riddle, its rhythm and essence so utterly alluring that it demands to be explored. It has a depth that keeps travellers in a constant state of rapture and delight’.

I remember capturing my own feelings in a blog I kept at the time:

Vivaldi In The Elevator? Smile, You’re Back!!

Skyscrapers beyond the dreams of Richard Rogers or Terry Farrell;

Rain polishing the whole place, ready for a remake of Blade Runner. 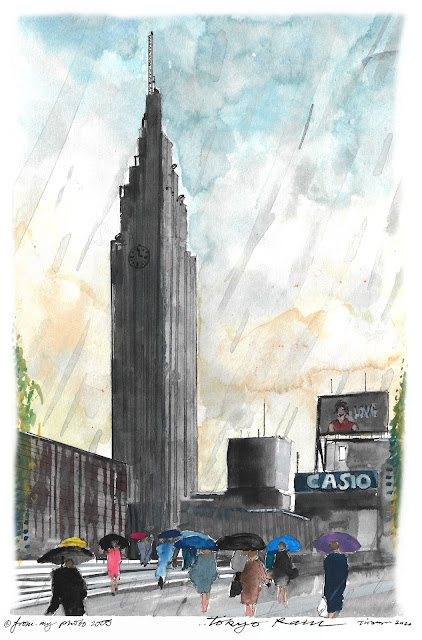 THE MUSIC MAKERS OF ÅKERSBERGA 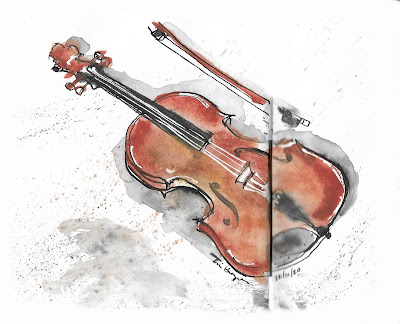 Reproduced with his blessing, an email exchange with Robert Von Bahr who runs a delightful record company in Sweden, BIS CLASSICAL.  I discovered BIS quite by chance, having heard their recording, The Russia Viola, on Spotify.....

Is this wonderful recording - fantastic music which I discovered, by chance is the album available on vinyl?

No, and it never was.

My question back would be why you'd like to destroy an original digital recording by releasing it on vinyl.  The ONLY possible advantage with vinyl would be, if the original recording were analogue - and this one wasn't.

Thank you for your reply.

Of course, I get it.  Sorry, I am under educated in the world of high fidelity recordings

Have ordered the CD

How very nice.  Whence did you order it?

(TRUTH BE TOLD   I was in the process of ordering but had not yet completed the task. Now armed with www.bis.se I placed my order)

Goes to the Post today, but please do have patience anyway - the Post isn't as fast as they used to - or indeed shoud - be.

A small surprise and the start of a Swedish stamp collection of stamps, 30-50 years old.

Enjoy and don't let this be the second time you come to us - first and last combined...Best - Robert 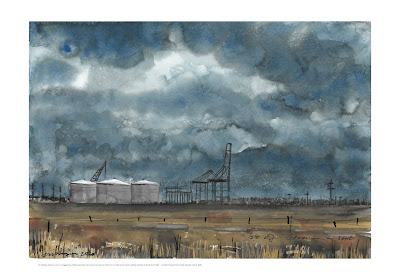 In my mind I have returned many times this year.

Reed beds struggle to be heard above the wind. This is a landscape of horizontals, burnt umber, sepia, sap green, raw umber, pylon lines.

What’s here is old industry except for the Amazon distribution centre, the new kid, welcomed by the local council.

Big skies grey and steel blue and occasional bright sunlight shouldering its way through the cloud. Then it is pushed back.

This is also a landscape of verticals, pylons, silos, warehouses, floodlight towers, fence posts, and barbed wire, brambles that are nature’s barbed wire. Pylons, rank upon rank, soldiers, numbering off, on parade.

‘Nothing save marshes, mud, water, purselane, sky, tufty saltings, glasswort, wrack and sheep.  But the chromatic and textural variations of sky, mud and water are infinite

Jonathan Meads from Museum without Walls 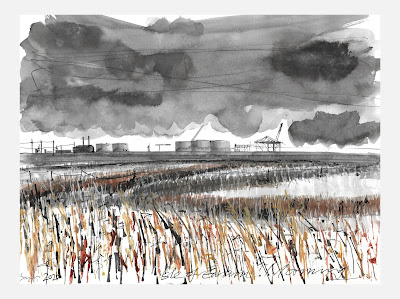 Isle of Grain is on  the easternmost point of the Hoo Peninsula within the district of Medway in Kent. No longer an island and now forming part of the peninsula, the area is almost all marshland and is a major habitat for diverse wetland birds. Wikipedia

There is  massive of excitement in Hazlemere, population 10,000, a town situated few miles north of High Wycombe. There Holy Trinity Church is under going a multi-million pound construction makeover. The congregation have already pledged over a million pounds for the ‘Trinity Centre’

A spokesman for Holy Trinity said

“Our society has shifted. We engage relationally more and more through the cafe culture. It’s a place where people can explore ideas and build friendships in an informal and relaxed environment. Trinity centre will provide this dedicated hospitality, welcome and cafe space.”

“Clear lots of ground for your tents!

A little digging reveals that for more than two years, Eugene Hoiland Peterson devoted all his efforts to writing The Message: The Bible in Contemporary Language. His primary goal was to capture the tone of the text and the original conversational feel of the Greek, in contemporary English. Some might know that Eugene Hoiland Peterson was an American Presbyterian minister, scholar, theologian, author, and poet. 1932 – 2018

God Loves a well crafted latte and a cheerful barista. 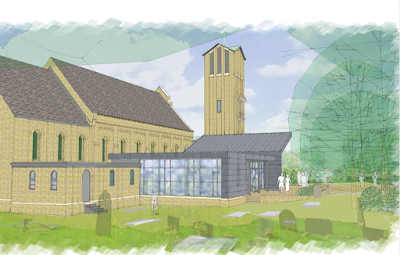 God's Glory: An artists impression
Posted by Tim Baynes Art at 19:08 No comments: