Further along is Heybridge Basin our final stop on this windy wet tour.

Heybridge Basin where the 12-mile navigation from Chelmsford pours out into the River Blackwater through and ancient lock now modernised. Next to its quay two pubs eye each other up, The Old Ship Inn and The Jolly Sailor.

Again, there is the constant song of rigging on mast. There are few people about; we imagine the area is overflowing in the summer; with people sailing and a regular tide of visitors ebbing and flowing from the nearby caravan parks.

We toss a coin and enter The Old Ship, two pints and a portion of chips (make that two please).

Another jaunt under the banner of Travels with my Architect. Trevor brings his implacable architectural eye has created some great photo’s. We hope Curious Coast makes you inquisitive to visit these places. More drawings and photographs here
http://www.curiouscoast.co.uk
Posted by Tim Baynes Art at 19:04 No comments:

Rain comes as we enter Tollesbury. This is village of the plough and sail, and has relied on the harvests of the land and the sea. Oysters are still an important trade.

On the hard, looking out across the saltings the tide is starting to flow, underlined by a local’s warning not to stay parked in this particular spot for too long.

Everything is falling apart or filled to the gunnels with water, intrusive is the constant morse code of rigging against mast. Recorded on my phone it sounds like footsteps. It’s tempo conducted by the wind.

The Tollesbury Cafe provides good coffee, fortified we return to a drubbing by wind and rain.

Another jaunt under the banner of Travels with my Architect. Trevor brings his implacable architectural eye has created some great photo’s. We hope Curious Coast makes you inquisitive to visit these places. More drawings and photographs here  http://www.curiouscoast.co.uk
Posted by Tim Baynes Art at 18:59 No comments:

Land competes with water for space. At low tide water and mud slithers between cracks and crevices in these damp green and rust colour marshes.

COPT HALL NEAR LITTLE WIGBOROUGH
Unruly gulls seek food; a curlew is unable to settle.
And landscape punctuated by an occasional frail wooden fence post.
Far in the distance is the box-like shape of Bradwell Power Station, partially decommissioned.

The River Blackwater is the lands sluice.
And in these margins, here, is where the Roman’s gathered salt, the terracotta shards of their pots still strewn.

Farms and fields abut this marsh ground.
The winter wheat is now clearly visible.
A church close to collapse and roped off. The congregation is directed to the neighbouring parish, pro-tem. The church’s tower looks out to the estuary, and drainpipe gargoyles poke fun as we graze up at them.

For more information on this wonderful place visit
https://www.nationaltrust.org.uk/copt-hall-marshes

Another jaunt under the banner of Travels with my Architect. Trevor brings his implacable architectural eye has created some great photo’s. We hope Curious Coast makes you inquisitive to visit these places. More drawings and photographs here
http://www.curiouscoast.co.uk

Working in the Sea Containers building (on the south bank by Blackfriars Bridge) you gaze across on the industrious work of construction teams on the north side of the River Thames.

I was witnessing Tideway at work, ‘building the Thames Tideway Tunnel'.

It is owned by a consortium of investors, and more than two million pensioners have an indirect investment in Tideway though UK pension funds managed by those investors’. (according to the Tideway web site.)

It breathlessly describes the project:
As the London relies on a 150-year-old sewer system built for a population less than half its current size. As a result, millions of tonnes of raw sewage spills, untreated, into the River Thames each year.
That’s where we come in.
We’re building a 25km Super Sewer under the Thames to intercept those nasty spills and clean up our river for the good of the city, its wildlife and you.

The full Tideway story, the high water mark if you will, is here https://www.tideway.london/about-us/
Posted by Tim Baynes Art at 19:12 No comments:

AN OUTSIDER IN THE WOOD 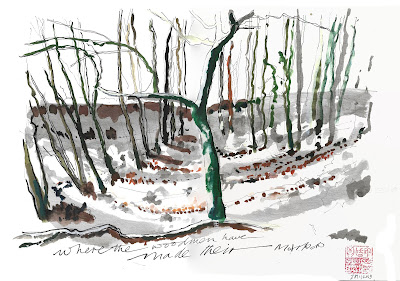 Two or three times a week we enter the magical world of GreenAcres; a captivating place, seventy two acres of wonderful mature woodland.
People come to celebrate, a new addition to a family, the coming together for a wedding or commemorating the passing of a loved one.

A team of foresters cares for the whole woodland. We often meet and chat to them on our walks. So much care is invested in this place. However it is not manicured or notice-strewn. The wooden buildings for ceremonies are architecturally exciting.

At this time of year the trees are at their best, stripped of the distraction of their foliage. They are open for us to enjoy. I take photographs and, looking at them afterwards, one appreciates how trees take on human form.

Artist Paul Nash invested trees with distinct personalities, describing how he tried ‘to paint trees as tho’ they were human beings’.

More on Greenacres here https://www.greenacrescelebrate.co.uk/park/chiltern/
Posted by Tim Baynes Art at 19:09 No comments:

HEAD AND SHOULDERS - A RACE BE BE TALLEST

Again from my room in Sea Containers House, a conspicuous Modernist confection on the south bank of the River Thames: ,,I am thrilled with the view downstream.

Being played out due east is an architectural clash of the Titans, which is the City of London’s skyline.  Although the Shard, just outside my view is currently winning, it weighs in at 310 metres high. I can see One Canada Square in Canary Wharf and the Heron Town (110 Bishopsgate) respectively second and third tallest

Some tall towers are given interesting sobriquets; we have The Gherkin, The Walkie Talkie(20 Fenchurch Street) and The Scalpel

What is most exciting is the way the weather plays across these incredible buildings and sometimes wraps them up in clouds and mist. A sunny late afternoon in January will turn them gold, akin to the rental incomes they must secure for their owners.
Posted by Tim Baynes Art at 19:04 No comments: 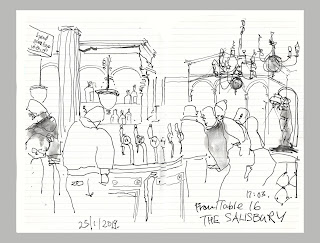 The other evening with time to spare before a supper date I went into the Salisbury Pub on St Martins Lane. I had not been inside for forty or so years. A warm summer’s morning, with a gaggle of friends making a weekend of it.

I remember going down stairs to the Gents and then finding an well dressed city-type in the stall next to mine trying to open up a conversation. I fled upstairs in panic; much to the myth of my friends.

Forty years on on a Friday evening the Salisbury was packed as I made this drawing. A delightful American couple made a fuss when leaving the table next to mine anxious not to jog my hand. And to my left three Irish boys were keen to see my output.

The Salisbury was well known as a gay-friendly pub from Oscar Wilde's time up until the mid-1980s. The 1961 British suspense film Victim, directed by Basil Dearden and starring Dirk Bogarde and Sylvia Syms, includes scenes inside and outside The Salisbury and was the first English language film to use the word "homosexual".

THANK YOU WIKIPEDIA
Posted by Tim Baynes Art at 19:32 No comments:

A real culinary discovery in Worcester the other weekend. We were taken by super chums Chris and Liz to The Colorful Pots, a Polish restaurant not far from the city’s great cathedral.

The Colorful Pots (no ‘u’) is not long opened. We enjoyed the food, generous portions and decor. The place had a real buzz.

Regarding the decor, the colours and style of wall motifs, table linen and such, against pure white, was all traditional Polish. All this colour gave the place a fey ’60’s feel, lovely.

Service was hyper-attentive from a delightful young man, enviably lithe.

Food detail: Sian had a lovely combo of stroganoff wrapped in a rosti-style envelop and I enjoyed a meat loaf, ‘baked’ to perfection. I kicked off with the herring - perfection.

Link to the home page: https://www.facebook.com/PolishRestaurantUK/

I love the writing style of TA's reviewer's
Posted by Tim Baynes Art at 19:45 No comments:

A BRIEF HALT AT HOLT


When the Normans were trying to subjugate the Welsh they allowed  a whole swath of land from the River Severn west, right into the Principality of Wales, become wild moorland, a natural barrier, fortified by bramble and bog. Little was built in this region. The land did not see a plough until the 16C

However provision was made for the Church and thus St Martin’s Church was built by the Normans, an 11C treasure trove of Norman architectural bravura, completely intact!

The very best of Norman carving from warm pink sandstone.

We were visiting with friends Chris and Liz from Worcester and so we crossed the river and explored Holt. The little church was open and the lights easily accessible so I was able to make some drawings.

Opposite St Martin’s is  Tudor gatehouse of what was once Holt Castle another defence remonstrance against Glendower and his ilk . The rest of the village was moved north some centuries ago.

Simon Jenkins (England's Thousand Best Churches) remarks ‘most counties have at least one Norman survivor and Holt is Worcestershire’s’
Posted by Tim Baynes Art at 19:13 No comments: