GOD'S FIRE STATION Our Lady of the Assumption -

This arresting church stopped me in my tracks as I peddled along the busy A4 out of Newbury and into Thatcham. I was keen to know more and emailed the church.

I was delighted by this reply:

I am sorry to have taken time to reply to your message. Thank you for your interest in our church. Before I put the sign, 'Catholic Church' on it many people thought it was a fire station (thanks to our curious bell tower). There is no guide book but I can tell you that the church was built in 1977 and replaced the building now used as a hall which dates from the 1950s

Want a great café? Then Mount up 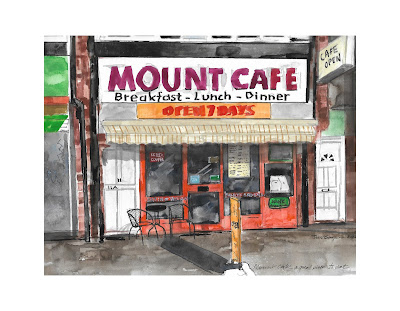 Less than ten minutes from Heathrow Terminal 5 is the wonderful Mount Café.

We enjoyed the all day breakfast, the perfect lunchtime treat and close to where we were shooting photographs a little further along the Uxbridge Road, Hanworth.

Highly recommended and also very popular with the Ubereats and Deliveroo crowd.

The King's Church High Wycombe stands high and proud on the Desborough Road, it might be mistaken for an office block or welfare centre, which is a way it is.

It has a most interesting history. In the late 60s five families moved from Hayes, in Middlesex to a housing estate in Hazlemere and met together in the rooms of their homes.

By 1972, it became apparent the group needed a church. They bought a house, 27 Penn Road Hazlemere. This was financed by the congregation pooling together the money; no hand-outs from the diocese. The place became known as ‘Living Water’.

The group continued to grow and outgrew ‘Living Water’. In 1982 they decided to build a church and purchased a book shop and office space in the Desborough Road.

Fast forward to 1992: just down the road a site became available and raising £1,700,000 from property sales, bank loans and donations from the congregation – job done! The King's Church Centre was complete and open for business.

This remarkable story of God and man is taken from the church’s own website here - https://kchw.co.uk/history/ 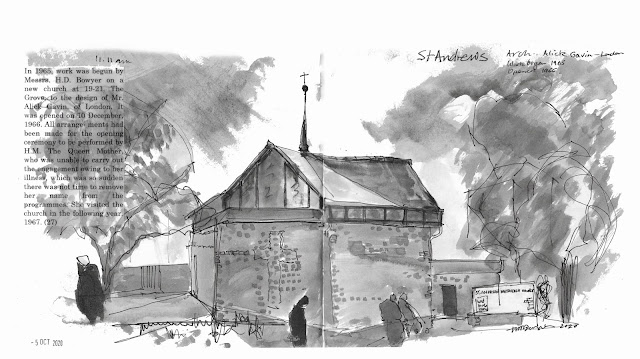 ST ANDREWS & THE QUEEN MUM, AS GOOD AS HER WORD

On the 10th of December 1966 the Methodist church of Saint Andrews was opened.

There was a much bigger Methodist Church in the centre of Slough however why not build another. Work began in 1965 and a year later it was good to go.

Her Majesty the Queen Mother was invited to perform the opening ceremony.

Sadly she had to call in sick.

(Gasp at other end of the telephone)

Imagine the reaction of the churchwarden

“What do you mean? We’ve already had the programs printed with ‘er name on it and everything”

However, it must've been about a year later when HRH was leafing through her diary for the previous year and seeing the entry for St Andrews’ opening.

"Oh, I never did get down to opening the church in Slough"

Then calling across to her aide,

Er, Billy*, get ‘em on the phone, then bring the car round the front and we’ll pop round and see ‘em now.

It was a lovely sunny afternoon in mid September as Rosie and I entered the Borough of Bracknell. Our specific purpose was to visit Point Royal.

Our destination lay just outside the town centre in area called Easthampstead.

And there it was on a rising piece of open ground, flanked by trees. Bathed in sunlight it looked like a pagoda.

Designed by Arup Associates, 1960 – 4, Point Royal comprises 17 stories of concrete loveliness and painted cream providing 102 flats. It sits in a shallow bowl of concrete, underneath this is parking for cars.

Nikolaus Pevsner (Buildings of England: Berkshire published 1966) described Point Royal as ”one outstanding job” adding “It calls for four or five more of an identical design”. Odds on that if four or five more had been built it would have attracted the attention of 1980’s demolition teams and guardians of prettiness and picturesque.

Rosie and I eventually made our way into the town centre. We got shhu’d out of the shopping precinct in Princess Square however the girls in Starbucks welcomed Rosie (and I). We sat outside with my drink; across the street (Stanley Road) was an ecclesiastical flight of fancy. We looked out onto the Church of St Joseph the Worker.

Built in 1961 – 2 with an A-shaped west end. In the churchyard to the right is a free-standing openwork steel cross twenty two feet high, made in London and transported to the site in one piece. Architectsfor this lovely church were  Clifford Culpin and Partners.

Shop for God; St Joseph’s is a wholesome example of church-building ideas around 1960 and was influenced by the architect’s visit to Scandinavia in 1956.

Full story of the church is told wonderfully right here

One of the key stops on any tour of Brutalist architecture in London has to be the Brunswick Centre. This is another tale of brave design, prejudice against concrete, disrepair and regeneration (New Labour’s favourite hobby).

The place’s original design and layout is still largely intact and good to explore and appreciate. From its east side, on Brunswick Square, it peers through a warm veil of London plane trees, a cataract of concrete tumbling down to the street.

·      Mixed use – residential and commercial

·      The residential part of the scheme leased to Camden Borough

·      Council finally starts work on refurbishing the housing in 2005

*(Note the capitalisation of the ‘T’ – very popular today as in ‘The Science’ and ‘The Church’). 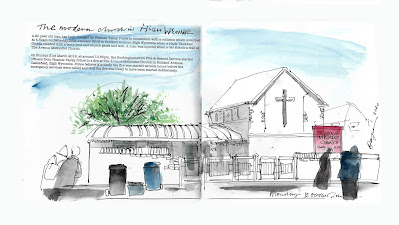 High up on one of High Wycombe’s hills, before Castlefield slithers down into Cressex runs Rutland Avenue. Elbowing its way out onto this road is the Avenue Methodist Church, busy, popular and with a food hygiene rating of 5.

This House of God is on a road prone to mishaps, illustrated by this story, four years back:

A 20-year-old man has been charged by in connection with a collision, which occurred at 4.50am on Saturday 30th January. *

And a year before that:

… Black Vauxhall Omega collided with a lamppost and church gates and wall.

A man was injured when a car struck a wall at The Avenue Methodist Church. *

On Sunday 31st March 2019, at around 10.50pm, the Buckinghamshire Fire & Rescue Service alerted officers from Thames Valley Police to a fire at The Avenue Methodist Church in Rutland Avenue, Police believe it is likely the fire was started several hours before the emergency services were called and that the fire was likely to have been started deliberately. *

It was very peaceful as I sat quite close to the road’s edge to make this drawing in the series ‘The Modern Church’ an impromptu survey of post WW2 war churches in High Wycombe. Perhaps if I had read these stories (all from Wycombe Today) I might not have been quite so audacious.