Last Sunday we visited Columbia Road Flower Market . One road, full of flowers, just the off Hackney Road it is open on Sundays only. I was as busy writing down the cries of the stallholders . . .

His neighbouring stallholder: "Careful darlin' 'cos that's not the only thing that grows in his hand."

Whitby and Scarborough: Jewels of the North

Two towns, the first, Whitby, this is the town that launched a thousand pubs all called ‘The Prospect of Whitby’.

We arrived on a dull late June afternoon however after a romp round Whitby Abbey (home of Bram Stoker and Dracula) it turned into a glorious summer evening and from the Abbey grounds the whole town was bathed in a golden light.

We were in this neck of the woods for a fossil hunting morning the next day.
>
We had decided to stay in Scarborough as Travel Lodge was offering a good deal. Their welcome, the room and location were perfect.  We looked out onto The Grand Hotel.

Grand it is and as I sat down to draw early the morning several coaches cautiously rolled up to collect people. Presumably at some stage of a tour, the halt and the fleet of foot disconsolately dragged their wheelies down the hotels steps to the bus.

Off we went to look for fossils! 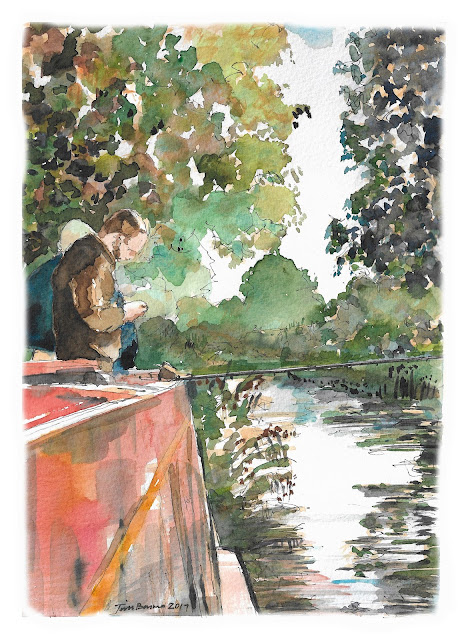 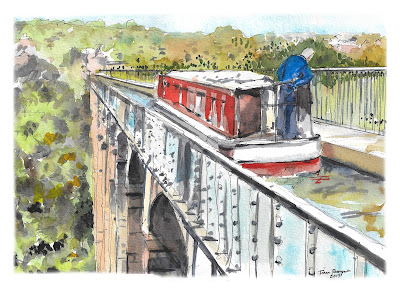 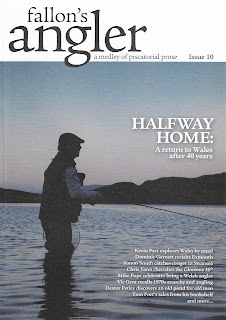 Lucky I am to have another commission from Fallon's Angler, Issue 10.

This time three illustrations, including a call for an illustration of a Roach, to complete the picture so to speak.

In his article Pysgota camlas by Kevin Parr takes in the sights and sounds and smells of canals in Wales. Yours truly adds a little water colour.

Drawing on the Solent from 900 feet


I have been lucky to sail on the Solent.
So when dear friend Chris Swinhoe-Standen, a flying instructor at Booker Aviation  - High Wycombe, suggested a jaunt  where would I like to go?
The Solent was a natural choice, to translate that sea and coast from familiar from ground level up to 900 feet up.
Off we went.
No time to think, just draw, it was akin to map making and totally instinctive.