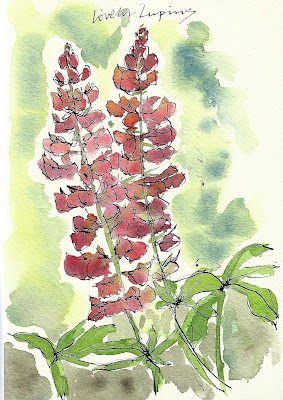 The seeds of lupins, commonly called lupin beans, were popular with the Romans, who cultivated the plants throughout the Roman Empire.

The European white lupin beans are commonly sold in a salty solution in jars. Rather like olives are pickles lupin seeds can be eaten with or without the skin and are a popular street snack in the southern Europe, after being treated with several soakings of water, and then brined.

I am not sure with the idea of lupin seeds will become the snack sensation at Beaconsfield Farmers Market.

However they do look lovely right now and are good for the soil. Roman agriculturalists were adamant that this plant contributes to the fertility of the ground.
Posted by Tim Baynes Art at 20:00