Of course we all knew that their name derives from the Greek skhoínos (sedge) and práson (leek). The English name, chives, derives from the French word cive, from cepa, the Latin word for onion.
So is the Chive a mini-leek? 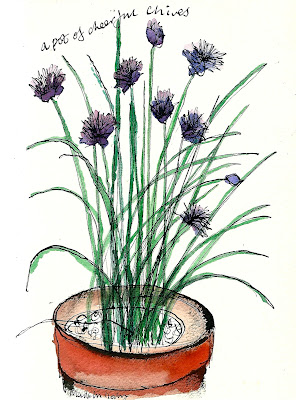 Big question, for me, is whether to deadhead one’s chives? Input  please.

Chives are grown both the table and the salad bowel. It appears that they have ornamental value; the violet flowers are often used in ornamental dry bouquets. If the English Summer ever comes remember the Romans believed chives could relieve the pain from sunburn.