SAILING ROUND THE SOLENT - SETTING OFF 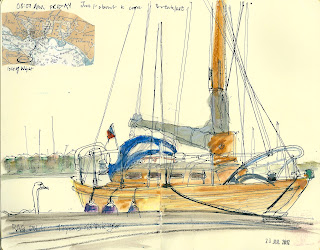 Chris was just back from Tokyo and I just back from Delhi, bleary eyed we rose early and met up with Skipper Tom for a couple of days aboard his boat, the good ship Ragdoll; a 47 year old, 28-foot masterpiece of yacht building is widely acknowledged to be the prettiest boat on the Solent.

Noon on Thursday we were just about off the mooring out of Emsworth (Chichester Harbour). Even with two reefs in the sails we seemed to skim across the Solent towards Isle of Wight. A couple of rain showers and a good wind and we put Bembridge by late afternoon and enjoyed a later lunch. 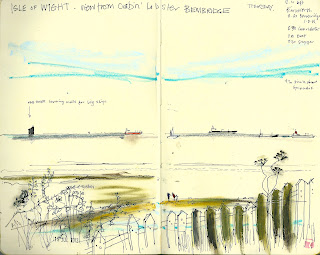 Bembridge and St Helens on the northeast tip of the island are very pretty.  Skipper Tom route-marched us up and cross the to far tip of Bembridge to the Crab and Lobster for a pint and some delicious crab. A local cab with chatty driver ensured a quicker journey back to the boat and supper. 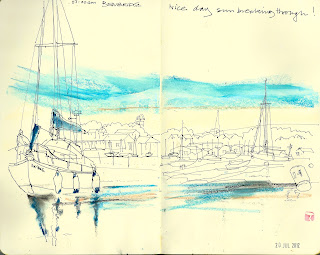 A pale blue purple sunrise with broadened out into deepest heat-promising blue. Skipper Tom, in another parade of local knowledge proposed a walk along the beach at St Helens, as we could not leave until 10’ish due to tide.  We enjoyed excellent coffee at the Baywatch on the Beach Café.


Out of Bembridge and moving west with the tide, past posh Cowes with its permanent spectacle of massively expensive boats. We turned on the smelly and motored most of the way to Newtown Creek. The weather then set fair which within a few days was to become the heat wave.

Newtown used to be the most important place in the Isle of White. In 1584, Queen Elizabeth gave parliamentary representation to the borough, perhaps in an attempt to revitalise it. In this she did not succeed, but nevertheless Newtown continued to elect two members of parliament during the next 250 years.

To be continued.
Posted by Tim Baynes Art at 20:04