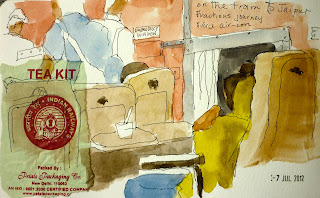 Saturday: Rose too early to catch the 06:05 to Jaipur the capital city of Rajasthan some 160 miles south east of Delhi.  It was a fractious four and a half hour journey evenly punctuated by a nice cup of tea and my right thigh being occasionally pummelled by the four year old on the lap of the passenger on my right; a end of the journey, Jaipur Junction, we were scooped up by a driver from the Jai Mahal Palace. This is another is another property in the Taj Hotel group.

City Palace Museum is the heart of Jai Sing II’s Jaipur, his City Palace. The gorgeous garments in the Textile Museum, which was formerly the Palace of Welcomes, Mubarak Mahal, enchanted me. I made some drawings and asked the guard to stamp my book.

We wandered through into the Diwan-i-Khas a marble one-storey receiving room, which houses two silver urns (largest silver objects in the world) which the Maharajah has made to carry water from the Ganges, he did not want to travel to England aboard his specially hired Ocean Liner in 1901; fair enough we all carry bottled water. 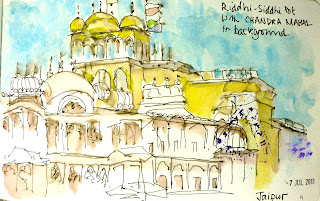 From the Courtyard of the Beloved, Pritam Chowk, and the four exquisite doorways, enhanced further by colour Japanese tourists, you can look up to the seven story Chandra Mahal where the Royal Family live today. 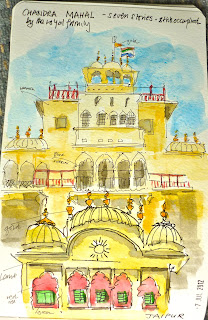 Jantar Mantar
There are six observatories in India Jantar Mantar is perhaps the finest build 1728 – 1734 reflecting the Maharajah’s passion for Astronomy and Astrology, 16 giant instruments turning the area into a sculpture park
Tuk-Tuk Travel: Confident in our survival blessings, we again enjoyed another theme park-like ride in a Tuk-Tuk to and from the hotel to the City Palace. On the way back the Tuk-Tuk's engine stopped with a scream and our driver quickly replaced in the clutch cable and we sped forward again towards iced tea at the Jai Mahal.
Posted by Tim Baynes Art at 09:00