SAILING ROUND THE SOLENT 2 - QUIET AND PEACEFUL 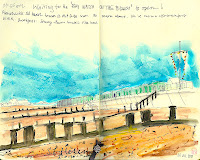 Now the estuary is quiet and peaceful; Curlews, Oystercatchers skim the water and occasionally pipe up against the constant chatter of the gulls.

A swarm of mullet rose to the surface, perhaps for our tortilla chips, before absolute low water.  Then Ragdoll like several others moored close by tipped over 30 degrees and we spent a couple of hours on one side of the cockpit, legs braced against the other side to maintain some sense of balance.  Large Gin & Tonics really was the only recourse as we prepared for being level and the chance to prepare and consume supper and with in finished, wine was the consolation. 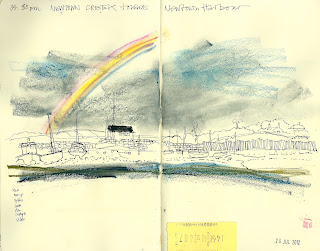 Cooking was almost brought to an end when we ran out of matches and called across the water to a boatful of sea scouts; answering our hail they then rowed over to a neighbouring boat begged a lighter off them: Be Prepared.

Mill pond calm dawn with orange tawny light: Saturday at 0630 we awoke to find ourselves at 20% a-tilt, however we were soon horizontal again and after breakfast we sailed gingerly out, towards deeper water and the journey back, eastwards, home to Emsworth. Wind and tide were with us for four hours; sails un-reefed and full. 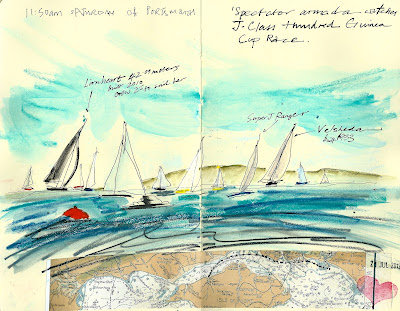 The fine weather and it being Saturday brought hundreds of craft into the Solent. Most of these were following the race of J-Class boats in a round the island race. Four J-Class juggernauts, with their crews of twenty or more, were hard at it, impossibly large sails and masts 180 feet high. J-Class, the kings of yachting, vying for supremacy and casting every other vessel was a bit-party in the sun-blessed pageant.

Later in the afternoon and we were back on the mooring; cleaning up and clearing out; kit bags off and covers on, all tied down and at rest; soon we were back in the dingy to the clubhouse after a splendid voyage aboard Rag Doll.