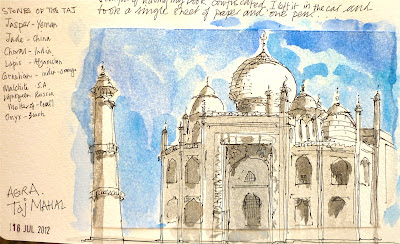 Nothing can prepare you for the vision of the Taj Mahal when you walk through the arch of the northern gate.  It shimmers like an apparition and appears to be floating over the ground. This vision has a profound effect; truly it is a Wonder of the World.

We had risen well before sun rise and with our guide, Imran, toured the lovely marble mausoleum with its precisions inlays of Jasper, Jade, Coral, Lapis Lazuli, Cornelian, Malachite, Mother of Pearl and Onyx.

Twenty two years in the making by 20,000 people and architects for Persia and Turkey it was truly a super-human achievement which resulting in a piece of ethereal architecture which is a fresh today as the day it was build.

It was the idea of Mughal emperor Shah Jahan, in memory of his third wife Mumtaz. The Taj is a perfectly and integrated complex of structures. He work began around 1632 and the Taj was completed around 1653 to house the tomb of Mumtaz.

High in a marble tower, in Agra Fort, with the finest view of the Taj, Shah Jahan was imprisoned by his son.The building of the Taj had all but bankrupted the State! 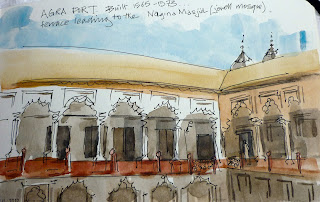 Agra Fort  is a dichotomy: Its exterior is a classic Mughal red sandstone stronghold, walls a high to crick your neck! Its interior parts are delicate marble rooms, passageways as courtyards. It has been here since the 11th century. Mughal fort in the 16th century and then taken by the British in 1857 until 1947.

We walked around the fort and I made some detailed drawings and comparisons with my last visit in 2007 and discovered that some of the earlier parts of fort, albeit in red sandstone are quick delicate in their decoration

After four hours of sightseeing before 10 am it was time for breakfast, we were as hungry as hunters.
Posted by Tim Baynes Art at 11:20