Decided to forego the hotel car service and thus enjoyed several transportation experiences. Took a regular taxi which with a bench seat in front and no head rests means passengers can get a good view!  Then we graduated to  a bicycle rickshaw around the Silver, Spice and Shoe markets and finally a tuk-tuk back to the hotel.

The Red Fort is another flight of Mughal architectural fancy on the grand scale. It has six gateways its own covered bazaar and more royal apartments than mansions in Essex. 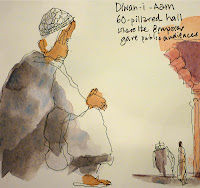 Illustrated here the Diawan-i-Kas, the pavilion that once housed the peacock throne, where the emperor would meet his most trusted nobles all in marble and once covered in jewels, another thing in common with the bling-bling of Essex. Boasting sixty pillars the Diwan-i-Aam is where he met everyone else all of it straight out of Disney’s Aladdin.

After the Bazaar to the Jami Masjid mosque, the largest in India capacity of prayers of 35,000 people so said our unsolicited and self-appointed guide. It was Friday so even after Prayers the place was busy with people asking for things. 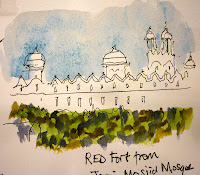 This evening we met up with good local friend Aparna and excellent part of town close to the hotel called Khan Market, to which we will return. Tonight the monsoon arrived; tomorrow we rise at 04:30 for the train to Jaipur.
Posted by Tim Baynes Art at 18:29