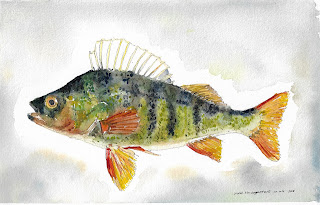 Fallon’s Angler*, ask me to paint a Perch one three illustrations for a story by Nigel Ling.

I thought I would poke the Perca with a little research.

Peter Perch is blessed with green hues, from dark to lemon, with those dark vertical bars. That red or orange colouring in the tips of his fins completes the look. Found in ponds, lakes, streams and rivers, perch are sought and caught in a number of different ways using a variety of baits.

The Perch is not a big fish, most weigh in at around a 1 lb., anything over 2 lb. is a prize catch.

Perch have often formed a vital part of the total weight caught by an angler during a competition.

In 2015 angler Ross Winfield failed to weigh a perch during a competition that cost him a top 5 place.  Unfortunately, he later found a perch that would have tipped the scales, at the bottom of his keep net.