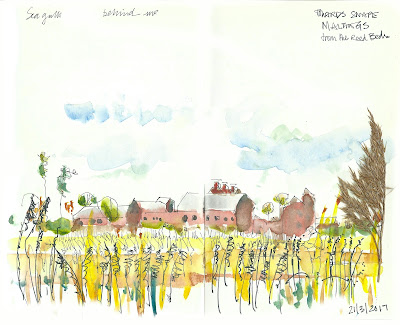 The Maltings at Snape rise up from a sea of reeds like some dark red ocean liner against the sky - as the sun lowers. Gulls cry and down on the estuary of the River Alde oystercatchers chatter and a single curlew plays its part in this Score.

Immediately one is in mind of the very visceral opening bars of ‘Dawn’ the first of the sea interludes* in Britten’s Peter Grimes. Unmistakable. And like this estuary and its mud flats the music and the place is so special to Suffolk.  These parts inspired so much of his music; broad skies, constant winds and a light that orchestrates the whole land.

Snape Maltings is an arts complex on the banks of the River Alde at Snape, Suffolk, UK. It is best known for its concert hall, which is one of the main sites of the annual Aldeburgh Festival.

*The Four Sea Interludes were published separately (as Op. 33a) 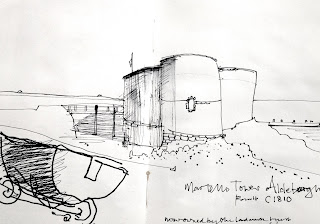 FOOTNOTE
We were exploring around Orford Ness and Aldeburgh, with special friends Jane and Trevor, staying in a wonderful Martello Tower which they had rented to celebrate T’s birthday.

Trevor appears several times in this blog in the ‘Travel’s with my Architect’ posts.
Posted by Tim Baynes Art at 19:30