“The 2010 eruptions of Eyjafjallajökull were volcanic events in Iceland which, although relatively small for volcanic eruptions, caused enormous disruption to air travel over  six days in
April 2010.”
© Wikipedia

The other day I found my diary and drawings . . . I was 5,969 miles away in HK returning home, or trying to  with BBC colleagues Laura, Chris and Tom.

Now we were in Istanbul. 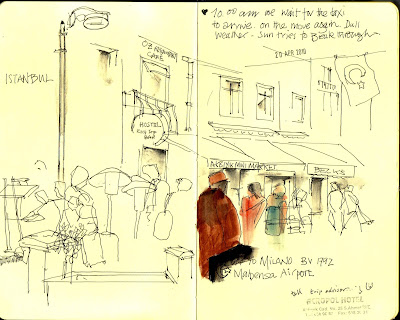 April 19 Monday We left Dubai 02:35 and into Ataturk Airport at 06:00. The deepest sleep I have ever had on a plane - the threat of constant standby or the MacDonald’s we had at Dubai Airport?

Our lodgings are a small Best Western near Topkapi Palace and out comes the sun.

The call to prayer mingles with the tap tap of carpenters across the street. A tour around the Blue Mosque and then to conference calls and briefs and counter briefings to those brilliant people in London what are trying to get us home.

Spirits reasonably high but oscillating between happy (when we have a plan) and less than happy when one component of it falls over.