Time out in Tilbury

Another coastal jaunt with Trevor, this time on the north sided of the Thames Estuary, to Tilbury. 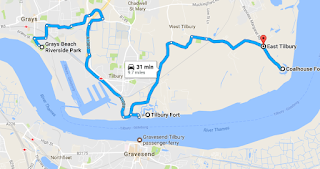 We left home far too early and an empty M25 saw us in the Duck Café and Restaurant (241 Dock Road) for an excellent breakfast. This was a perfect place from which to explore this unique area and pick the brains of Wikipedia.

Tilbury was established in the late 1800s near a 16C fort, built by Henry VIII and ancient cross-river ferry. The ferry still runs to Gravesend. As we gazed across the Thames, the sun came up on its minarets.

Tilbury has a major deep-water port, and it contributes to ‘Tilbury Docks’ rhyming slang for socks (As in “a nice pair of Tilbury's”).

The narrowness of the Thames here made it a suitable place to construct forts for the defence of London against foreign invaders. Further along the waterfront two power stations were enjoying the sun, Tilbury A Power mothballed 1981, and Tilbury B was still going up until 2013

Doubling back upstream a couple of miles we reached Grays Beach Riverside Park. This was an extraordinary public space, with a huge sandpit, play galleon, skate ramp, an aerial zip-line, ‘multi-use ball court’ plus ‘a large open grass field, ideal for picnics’. Not quite so tempting in November. The website also advised that the café is closed until further notice, and regretted that no public toilets or baby change facilities are available within the park but apologised for any inconvenience caused.

Coal House Fort
Lord Palmerston, twice Prime Minister twice during the 19th century was keen to promote the idea of a defensive wall around the British Isles to protect us from the perceived European threat. Coal House Fort, a few miles to the East, was part of the plan. And it served in both World Wars. In WW2 the Royal Artillery, Royal Marines, Essex Home Guard, Royal Navy, the R.N.V.R and W.R.N.S were all stationed at Coal House. It is easy to imagine the stream of traffic to and from Whitehall along the A13 into Essex

Our final port of call (no pun intended) was the former The Bata shoe factory in East Tilbury. This building is all that remains of an industrial estate in Essex, which produced shoes for over 70 years. Founded in 1932 by Tomáš Baťa, from Czechoslovakia.

In 1933 he added Bata houses for workers were built, set among gardens, shops and public buildings in the modernist style. "Bata-ville" had all the services of town, including a theatre, sports facilities, hotel, restaurant, grocery and butcher shops, post office, and a newspaper.