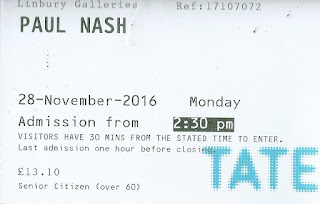 After our recent trip to the WW1 fields of Flanders and the Somme
Paul Nash was the perfect accompaniment.

Tate Brit has a major retrospective that runs through until March. You can see Nash’s painterly beginnings (dream like trees near Iver) on then through two wars and his surrealist journey and move into abstraction.

Equally exciting was Nash's fascination with objects on, in and above the landscape. 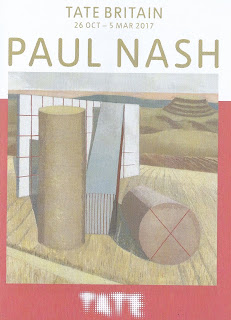 Living in the Chilterns, at this time of year, when, it is coming into its loveliness Nash's interpretations of trees and ground are inspiring.

The second roomful of Nash contained some of his most famous war pieces from 1916 through 1918; including Menin Road of which I made a drawing. I have had it in mind for some time to paint my version in homage and from the evidence I experienced first had six weeks prior.

Amongst these war paintings are fragments of his letters home, which speak to how he found how the landscape regenerated each spring in the Ypres Salient and his eventual despair as the conflict dragged on.

I am planning to go before the show finishes
Posted by Tim Baynes Art at 18:26