St Anne's - a delight in Dropmore

Several times I have passed this tiny church. It sits amongst the trees and undergrowth on the edge of Burnham Beeches and peaceful here, away from the roar of Bugatti's and Bentleys of Beaconsfield.

I made some enquiries as to it's history and was rewarded by a super story sent by Church Warden Sue Blore.

With sincere thanks I reproduce it in full

St Anne’s Church, Dropmore, was founded in 1865 by George M. Fortescue, nephew of Lord Grenville who established Dropmore estate in 1792. He inherited the estate on the death of Bishop of Lady Grenville in 1864.  The church was dedicated in 1866 by the Bishop of Oxford, and Dropmore became a parish in 1867.  The Fortescue family added the transept in 1877.

Both the church and transept were built by Butterfield.

Later alterations to the church included the placing of an organ on the site of the original vestry, and the building of a new vestry in 1911.  The later was constructed in memory of Sir John and Lady Anne Aird of Sheepcote Manor.

Features of interest in the church include the east window which is the original, dating from 1866.  Another interesting stained glass window, by William Morris and Company, is to be found in the vestry.

The Lord Courtauld-Thompson window is a good example of more modern stained glass work, depicting his varied connections and Dorneywood, which he left to the nation and is now used as a residence by the Chancellor of the Exchequer.

The window is dedicated to Lord Courtauld-Thompson, his father, his sister Winifred, his sister Elspeth and her husband, Kenneth Grahame, author of Wind in the Willows.  The inkwell and Quill denote his occupation as a writer.

Memorials inside the church, and tomb and vault in the churchyard, show the association with the church of later owners of the Dropmore estate, the Berry family, the head of whom was Lord Kemsley of newspaper fame.

(I cannot wait to get inside an make more drawings) 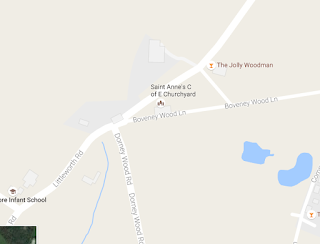