It was gloriously sunny day as Mike and I parked up in Lechlade and enjoyed a coffee shortly before peddling off.

This delightfully flat part of Gloucestershire looked like it had enjoyed good dose of room service; All the fields looked well ploughed and turned down ready for corn or fluffed up and ready for horn.

Cycling north east and we were heading towards Burford for lunch at the Rose and Crown in Shilton. (Panini central!)

Then we peddled west and south along the valley of the River Leach. It is tributary of the Thames, is approximately 18 miles long, springing from the limestone hills of the Cotswolds.

One can cross the river by a footbridge of flat limestone slabs and reach the church of St Michael and St Martin; this is now in the care of the Churches Conservation Trust and its upkeep is perfect.

Here, at one time, John Keble was curate here. Indeed the stone bridge, which Mike and I had crossed, is called Keble’s Bridge.

From Eastleach Lechlade was only four miles back and a good cup of tea awaited, again close by Ha’ Penny Bridge. 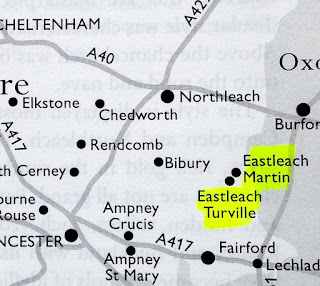 John KEBLE
Keble was a leading member The Oxford Movement, High Church members of the Church of England who mostly associated with the University of Oxford, argued for the reinstatement of some older Christian traditions of faith.

And Keble College was established in 1870, having been built as a monument to John Keble.