THE REMENANTS OF WAR AND A TRIP TO THE POST OFFICE

An F34 Fighter-Bomber, two helicopters and four pieces of field artillery, all once the property, some forty years back, of the US government, were parked up outside the main entrance. They were most benign, least harrowing exhibits we would see at the War Remnants Museum in Saigon, a permanent exhibition housed, ironically, in the former US Information Building in the city centre. 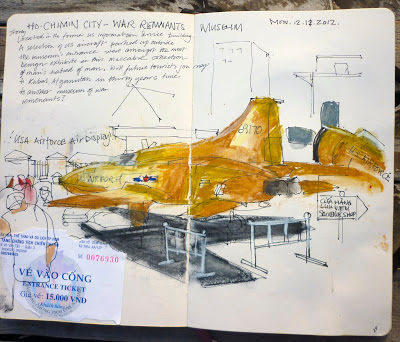 Three floors of exhibits and photographs, including bottles of formaldehyde containing the foetuses altered by the terrible effects of the US Dioxins (Agent Orange) sprayed on Vietnamese jungles and villages. A room was full of testimonies and pictures of wrecked and maimed victims of this chemical element of the war.
Another two rooms were devoted the to reportage, it was surprising how many photographers lost their lives reporting the horrors of this conflict, including Larry Burroughs and Frank Cappra.
A floor is devoted to the story of how the millions of non-combatants lived and lost their lives from the early 1950’s through to 1975. Like all such conflicts this was hell on earth for the both sides and those caught in the crossfire.
The were a palpable feeling of shock, despair and discomfort on the faces of those visiting this place, a mood culpability amongst those of us from the West of a certain age.  For me it begged the question as to if, in thirty or so years time, tourists would be visiting Kabul, Afghanistan, to see a similar shocking displays of warfare’s ingenuity and hardship?
Point Counterpoint: After the Museum and a very strong sweet coffee we walked a few blocks east, to visit the General Post Office. Designed and built by Gustave Eiffel  (1886 – 1891) and mentioned in the Guidebook as a landmark. With its pinks and light ochre, rich mahogany counters and seating and all ironwork picked out in dark green it is an architectural flight of fancy. 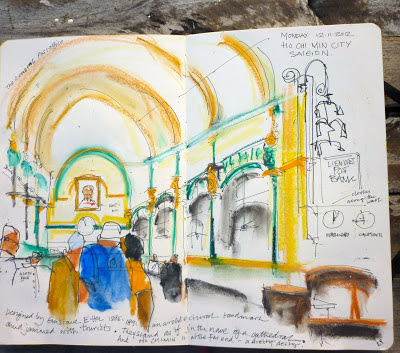 And the front entrance to the General Post Office was heaving with visitors, who like us, were gawping ceiling-ward.

It was rather like entering a cathedral and looking up and towards the sanctuary. This familiarity was underpinned with a portrait of Ho Chi Min at the far end were in a minster once would see the risen Christ.
Posted by Tim Baynes Art at 10:51