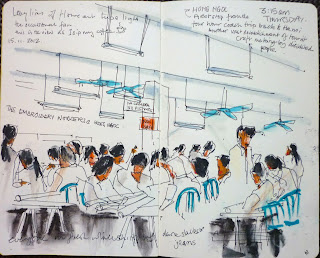 We left the boat around 1245 on Thursday and were deposited the Boat Terminus and then got on onto a bus for the four our journey back to Hanoi.

Bumpty bump, along roads of various states of disrepair with a coffee stop at another one of those Factory Outlets for handicrafts made by those disabled by the conflict.  As I sipped my coffee I made a drawing of the women and girls working on the hand embroideries and a flock gathered round to have a look at what I was about.

A quiet night in and the next morning we were up and packing for the flight south to Bangkok. I wandered round the old part of Hanoi where our
hotel was situated: small streets and a constant stream of motorbikes, street sellers, with shops and their contents spilling out onto the pavement. Progress in any direction was best achieved by walking towards the on coming torrent of motorbikes. 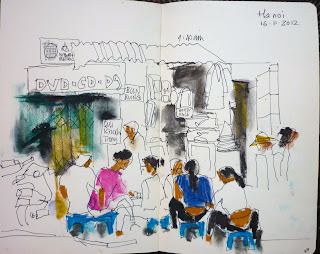 Hanoi, an ancient city founded in AD 1010 and a settlement of craftsmen around the royal court in lead to the development of the Old Quarter with its guilds, at one time there were thirty-six distinct guilds and crafts people. Many of the streets take their names from the craft guilds they housed. We appeared to be in Silver Street, shop next to shop of silver and other jewellery, punctuated by places selling tour across the region of Vietnam. 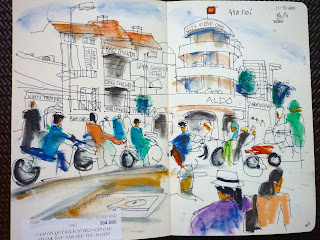 The merchandise in some streets was more modern, there appeared to be Tee Shirt Street, and Luggage Street with is constant display of North Face and Nike merchandise.
We headed out to the airport at midday. Laying plans to come here again next year. 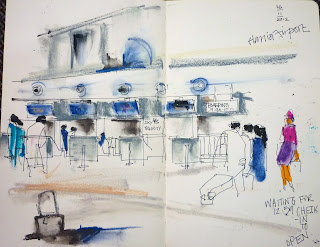