ALONG THE MEKONG - CAPTAIN WILLARD’S RIVER


Hung, our guide, gave us a briefing as we left the city. This was all being done strictly to time. Russians, Chinese, Singaporeans, Australian and Dutch formed the company of travellers for the next eight hours, four on the bus to and from the Mekong Delta, and four on the river. 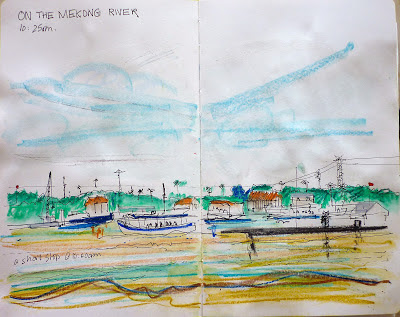 I was going to get as close I would ever to Willard,

"Captain Willard of 505 battalion, 173rd Airborne the central character in Francis Ford Coppola’s film Apocalypse Now.
Two hours on narrow bus seat and we were aboard the boat and out onto the Mekong River. Grey blue brown a lethargic river but full of purpose as boat of all sizes made passage up and down its length.
In the film Willard describes this river:
"I was going to the worst place in the world, and I didn't even know it yet. Weeks away and hundreds of miles up a river that snaked through the war like a main circuit cable.
The brown river, the Mekong, must be about five miles across where we were; we saw livelihoods in evidence on every part of both banks.
And then the large boat on which we travelled moored up on one of the islands and we decanted ourselves into smaller boats and explored the backwaters.

Palms, sugar cane and mango trees, crowding in on us, lined the brown tributaries . A stop for a place that made honey, another halt where they made coconut candy, and lunch elsewhere still. The sun pierced the foliage and turned the water to pale ochre as we tut-tutted, along the narrow canals. 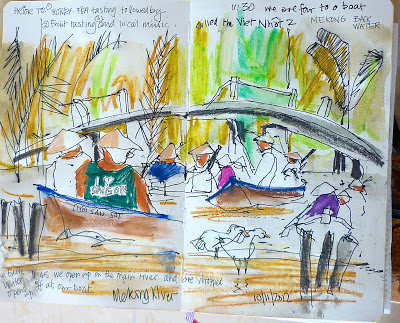 Eventually we emerged in to main river and were ushered into boat forty-five and then back along the broad brown stretch.
Again a piece of Coppola’s script came to mind: Robert Duval as Lieutenant Colonel Kilgore:
" We'll pick your boat up and put it down like a baby, right where you want it. This is First of the Ninth, Air Cav, son - air mobile.

I can take that point and hold it as long as I like -- and you can get anywhere you want up that river that suits you, young captain”.
Posted by Tim Baynes Art at 11:52