Double God today; Said Eucharist at St Martins just up the street. Said because the organist had unfortunately done her back in and so had her usual replacement. Once the St Martin's service was over, I scuttled back up the street for the Zoom Eucharist for all the parishes hereabouts. My attendance was essential as I was doing a reading from the First Book of the Kings. (19.4-8)

An interesting tale of Elijah going to sleep under a broom tree and an angel nudging him awake with cake and water (broom service?) and saying eat and drink and get up that Mount Horeb. 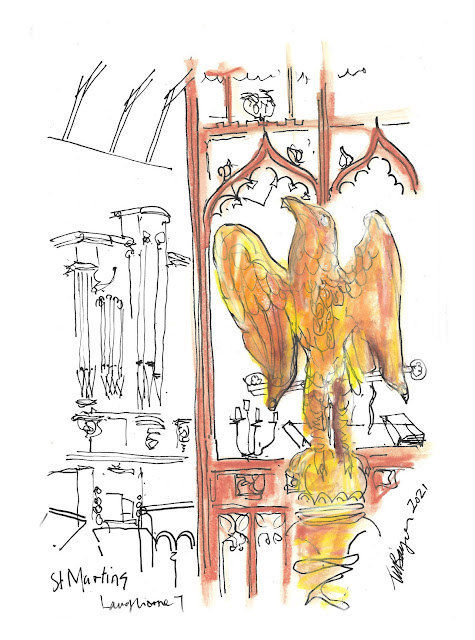 We have walked past Laugharne Castle 100’s of times and never been in, today we did. Siân had bought tickets for all of us and so through the castle gate we entered.

Located right the edge on the estuary of the River Tâf, its was originally built in 1116. Then the Normans saw its possibilities as a ‘let’s-keep-the-locals-in-order’ stronghold. There have been many alterations since then, including becoming a Tudor fortified manor house in the sixteenth century. It was in Laugharne in 1403 that Owain Glyndwr’s rebellion stalled not something we talk about. During the Civil War, in 1644 there was a good game of Roundheads and Cavaliers, the Roundheads won by a good margin of those killed.

Sian has signed me up for CADW a sort of National Trust, English Heritage all rolled into one! OAP rate makes an attractive
Posted by Tim Baynes Art at 19:00