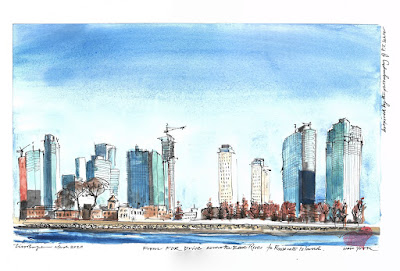 Roosevelt Island is now the place of high rises and expensive private housing schemes. As a location it is very popular with folk who work at the UN, which is just across the East River on Manhattan.

Through the 19th century, the island housed several hospitals and a prison, which at one point held 1,700 inmates, twice its designed capacity. One eminent resident was Dutch Schultz.  Born Arthur Simon Flegenheimer, ‘Dutch’ was a New York mobster of the 1920s and 1930s. Dutch made his fortune in organized crime-related activities, including bootlegging and the numbers racket. Poor thing, he was weakened by two tax evasion trials that led to his rackets being threatened by competitor Lucky Luciano. However Dutch’s net worth was $7m, pretty impressive; he doubtless could have afforded one of today’s fancy-schmancy apartments on Roosevelt Island.

Oh, and another visitor was Charles Dickens. He described conditions at the Octagon, an asylum for the mentally ill then located on the northern part of the island and really part of the prison complex, in his American Notes (1842).

The Octagon, now posh housing, was built in 1834. It served as the main entrance to the New York City Mental Health Hospital which opened in 1841.

Again this piece is inspired by the photography of PJ Lehrer who took the photo from the back or a cab. https://www.instagram.com/pjlehrer/

The writer is indebted to Wikipedia, ‘the people who keep knowledge free’, and he contributes to their cause.
Posted by Tim Baynes Art at 19:38