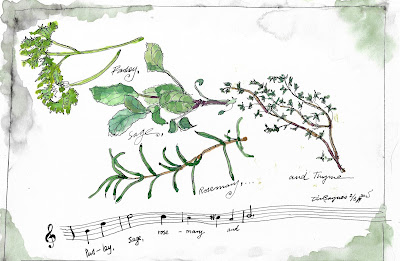 During that last-week-of Feb-2019 heatwave we gave the herbs in pots a good trim. Leftover sprigs were to good to waste and put me in mind of the song ‘Parley Sage Rosemary and Thyme’ a hit in the US for Simon & Garfunkel - 1966

Paul Simon learned about this song when he was on tour in England, where he heard a version by a popular folk singer named Martin Carthy.

When Carthy heard Simon & Garfunkel's rendition, he accused Simon of stealing his arrangement. Carthy and Simon did not speak until 2000, when Simon asked Carthy to perform this with him at a show in London. Carthy put his differences aside and did the show.

THANK YOU AND COPYRIGHT TO SONG FACTS ©