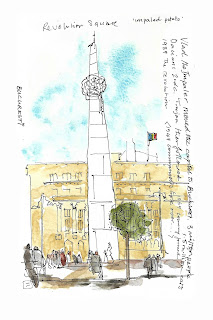 This morning, our coach wizzes us along the wide streets of Bucharest, light traffic because it is Sunday. Clear skies and sunshine. It was comfortable night in the Crown Plaza hotel. Its breakfast room was reassuringly populated with half of Asia. Good breakfast sets us up for the day.

Open Air Village Museum
In 1930 someone had the bright idea of uprooting a hundred houses across the entire country and plonking them down in the OPEN AIR VILLAGES MUSEUM. What a good idea it was. For in sixty minutes or more, if you have the time you can get an appreciation of Romania’s vernacular architecture and way of life of its people. This is an important primer for our time here. I was smitten by the 18C sub Carpathian pigeon loft. Also enjoyed the most excellent espresso.

The Palace.
Ortillia is our tour guide, she was quite brilliant shepherding us round the Palace of the People. It was an edifice only second to the Pentagon Building in size. This was Ceausescu’s great memorial. He never saw it completed as he was topped in late 1989 and democracy established. It is a remarkable place. Over 1000 rooms, built at a cost of US$ 3 billion (gold leaf does cost) with 220,000 square metres of carpet. The list of incredible facts goes on. 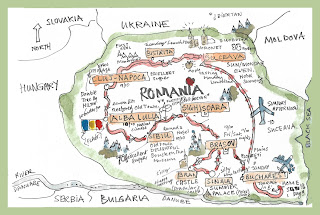 Our 1.5 km tour with Ortillia took us up and down 200 stairs. Marble everywhere and rich brocades and chandeliers. The place dripped with these ostentatious accoutrements. Wonderful, wonderful and so much off it and we saw a mere fraction. And were impressed as Mr and Mrs C thought we should be. 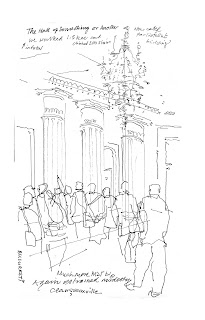 A view from the balcony showed that Mr C thought the whole area surrounding his impressive gaff should not be unlike the palace. He achieved just this with a wide boulevard leading off from the main entrances leading down into the city centre  - fountains, playing water canons, completed the effect.

The Old Town of Bucharest
Ceaușescu thought old towns were a waste of time and tried to lay waste to the one in Bucharest.
But not quite and now the EEC are pouring money into this part of town to turn it into ‘the Old Town’ that every Eastern European capital should have; to trap tourists and bring money into the country.

We had a kick  a beef and pork confection. Skinless sausages

The Sunday flight north 16:00
We take off in something with propellers into the late afternoon sun after an excellent stay in Ceaușescu-ville.
Posted by Tim Baynes Art at 19:00