VLAD LAND SATURDAY A castle and a palace

SATURDAY – A CASTLE AND A PALACE

Today we have two objectives: Bran Castle and the King’s summer Palace both close by and both swarming with tourists. These places are Romania’s equal to Times Square, St Mark’s Square, or the Shibuya crossing in Tokyo.

THE CASTLE
Bran Castle is in the immediate vicinity of Brașov, is a national monument and landmark in Romania. It is situated on the border between Transylvania and Wallachia. Commonly known as "Dracula's Castle" (although it is one among several locations linked to the Dracula legend.

The castle is now a museum dedicated to displaying art and furniture collected by Queen Marie. Tourists can see the interior on their own or by a guided tour. At the bottom of the hill is a small open-air museum park exhibiting traditional Romanian peasant structures (cottages, barns, etc.) from across the country stalls and huts settling all kind of tourist jumble.

My journal records:
People too much
Noise too much.

Every nationality was represented tramping round the rooms and floors, scrabbling for a selfie. 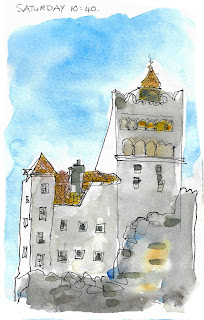 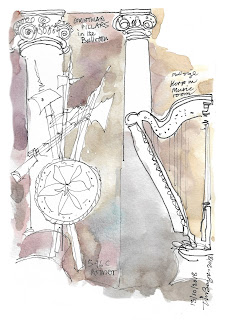 PeleșCastle is Neo-Renaissance pile in the Carpathian Mountains, near Sinaia. Like Bran Castle it is on an existing medieval route linking Transylvania and Wallachia. It was built between 1873 and 1914 for King Carol I, under whose reign the country gained its independence.

On his first visit to the area in 1866, he fell in love with the magnificent mountain scenery and decided a nice palace would be a good idea.

A German architect got the job, inside and out there is a distinct Germanic solidity to the place.

Queuing for a considerable time; “we found this when we went to the Taj Mahal”

remarked at fellow traveller for a rapid tour,  round some of the state rooms for which we donned blue plastic overshoes. Wise  move  given that between half to one million feet schlep through the place each year 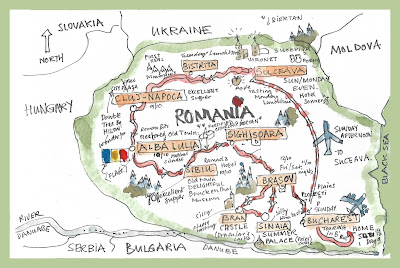