Early in the morning members of our coach tour are emerging from their rooms, unsure of which is the way to the stairs or elevator shatters the peace. Another day of fussing and politesse has begun.

However before we got on the Friday bus to Brasov we walked round the town, climbed the steep steps up the Tower of the Citadel where people used to muster to pour hot oil on any passing invaders. I made some drawings of 14C wooden chests use to protect or transport peoples’ possessions and headed back to the street. (Later that day I wondered why I’d drawn them. ‘Oh yes, I remember to avoid climbing to the top of the tower and unveiling my vertigo’.

Autumn was in her glory in the two-hour coach dash from Sighişoara to Brasov. I made a drawing of the medley of colours, terrains and vegetation, which was every shade of ochre, gold, hello and orange. Sometimes along wide planes and at others in to deep valleys which where the sun filtered through impossibly tall beech trees. 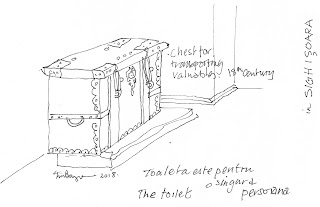 By noon we were on the outskirts of Brasov. We stopped at swish and swanky gas station so everyone on the bus could have a piss. There was the customary disruptive queuing and fussing in the shop. Mike reported that men’s room was awash (with water) so I crossed as busy single lane road and dived into some bushes along a dirt track nearby which was all to the good as far as I was concerned.

On the Agenda was a visit to The School Museum and curious building to the left of St Nicholas Basilica. We were given a lecture in Romanian, simultaneously translated by TGA, about life in school in the 1700’s and then shown a printing press built in 1640. A sort of Gutenberg-affair and shown a block of type. It used to take two years and 800 blocks to make one book; had they not heard of blogging? In ten years of high Communism, most of the books of Brasov where burnt, this is according to the old priest giving the talk.

We took a late lunch in the main square. We were dismissed and walked back to our hotel by 16:00 hours. We were grateful beyond imagining for three hours in our room at the Aro Palace. 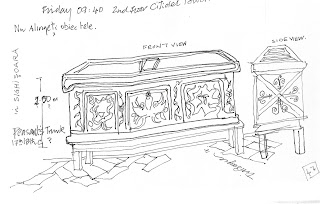