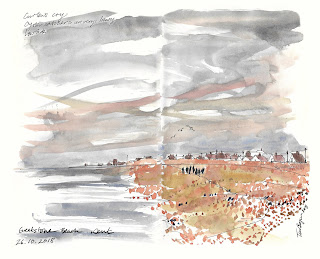 The eleventh Curious Coast Jaunt, begins in the former Cinque Port of New Romney, in Kent.

Trevor and I relished the ‘full English’ at Elaine’s Café, a yummy and fulsome start to this ten-mile tour along the Kent coast in the direction of Folkestone. It was a dull morning weather-wise, yet spirits were high as we regained the car and headed the mile or two to the beach: Littlestone Beach. 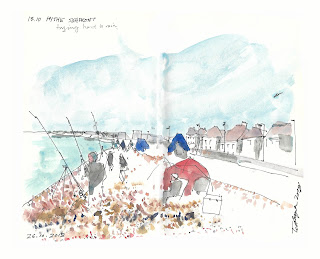 Littlestone Beach is not so little and its broad sands, scoured by a stiff wind gave way to Greatstone Beach. Here there was more lovely low water magic and the occasional drop of sun on the sand. South of Greatstone, in the distance stood the three shoe box-like shapes of Dungeness. Dungeness was a 2015 Curious CoastJaunt.

We left the beach and up onto the road, The Paradebecomes Coast Driveand thenGrand Parade, a not to be missed architectural romp past some of the most curious bungalow designs and dilapidation. A walk of little over one and half miles takes you past a PVC clad Dutch Gable End house, then a modern architect’s flight of fancy, further along, a low ranch-style dwellings and an imposing place that would sit well on South Beach in Florida.  There is something for everyone. 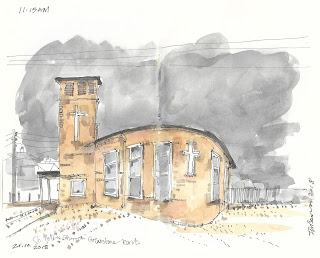 The present building was made possible by a generous bequest, and was opened in April 1962 by Michael Ramsey, Archbishop of Canterbury. The shape of the building is intended to reflect the shape of a boat
There is more detail on this delightful church and others at https://theromneymarsh.net/churches#peters.

It is a straight road from Littlestone Beach to Hythe, another Cinque Port. Hythe was busy, lots of cars and pedestrians on narrow streets, all seemed fractious.

Making a sharp right turn and we escaped to West Parade and the beach. Here we swapped the sand for crunchy shingle and we walked in sunshine at last.

Fishermen on the beach, in their igloo-like brightly coloured windbreaks cast, cast again and adjusted their lines. Mackerel appeared to be on the lines of some lucky chaps.

West Parade pulls itself up sharp and there is what remains of the Hythe fishing fleet. Several boats are hauled up on the beach against the backdrop of crow black fish sheds and colourful crates and buckets. 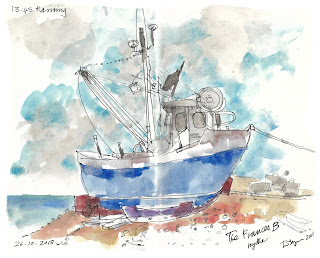 A little further and we reach the Martello towers and the intimidating MOD signs for the MOD’s practise Ranges are here and seem to stretch along the beach for miles. Keep Out!

We about turned and buy fish at Griggs of Hythe. https://www.griggsofhytheuk.com Skate Wings for Trevor and Fish Pie Mix for yours truly. We walked back for coffee and then headed home through the M25 grind back to Bucks.
Posted by Tim Baynes Art at 19:00