Sea Shell by the sea shore - jewels on the tideline 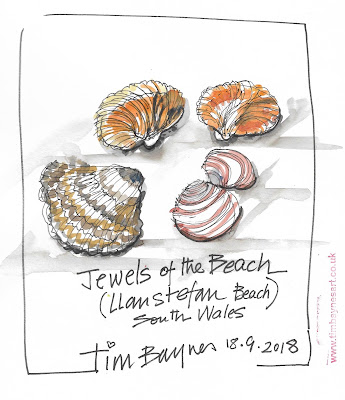 Britain’s seashores are adorned with the shells.

Again I have been poking around and found one really good easy to get to guides from COUNTRYFILE Magazine: https://www.countryfile.com/wildlife/british-seashell-guide-how-to-identify-and-where-to-find/

MONEY ON THE TIDELINE
Seashells have been used as ‘currency’ in various places, including many Indian Ocean and Pacific Ocean islands.  They have also been traded in North America, Africa and the Caribbean.

SOIL BOOSTERS
Because seashells are in some areas a readily available bulk source of calcium carbonate, shells such as oyster shells are sometimes used as soil conditioners in horticulture.

BLESS THIS SHELL
Seashells have played a part in religion and spirituality, sometimes even as ritual objects. In Christianity, the scallop shell is considered to be the symbol of Saint James. In Hinduism, left-handedshells of Turbinella pyrum are considered to be sacred to the god Vishnu.
Posted by Tim Baynes Art at 19:10