There are marginally more castles in Wales than Bentleys and Ferraris in Beaconsfield. In September, when we were down in Laugharne (which has its own castle), we discovered two more. Pembroke and Carew. 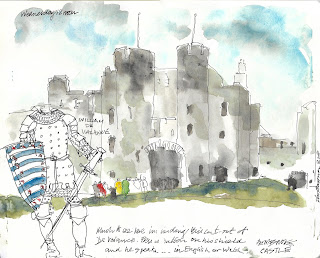 Pembroke provided the Normans with embarkation point for their Irish campaigns.

In the early 1400’s it held hold the castle against Owain Glyndwr's revolt. Glyndwr was given a wedge of cash by the Constable of the Castle and he rode off.

Henry VII who ‘launched’ the Tudor line of monarchs, was born here in 1457.

Pembroke supported Parliament at the beginning of the Civil War, but in 1648 the town's mayor, peeved at his lack of reward, joined a disaffected group of Roundheads unwilling to be demobilised. Cromwell himself laid siege to the castle, which only fell after seven weeks when the water supply was cut off.

Pembroke languished for centuries and was plundered for stone by the locals. But it was picturesque to draw

Now we can “Eat, shop and discover”and Pembroke Castle will be once again hosting its annual Christmas Market. “Last year over 15,000 visitors enjoyed free admission to what is fast becoming one of Pembrokeshire's must attend events of the year”.

Just down the road from big beefy Pembroke is Carew Castle. It is more deserted, and offers no Christmas Market but it does have a small gift shop.

Again Carew’s location was all about access: It lies on the Carew river commanding a crossing point of the then-still navigable river.

There is little left earth and timber castle, which was built by the Norman Gerald of Windsor in 1100.

Infamous King John seized it for a short time in 1220 when passing through Pembrokeshire on hisIrish expedition.

Carew Castle still remains in the Carew Family. In the 13th century by Sir Nicholas de Carew, built much of what we see now, three towers, the substantial west front and the Chapel.

The castle was remodelled during the Tudor period; Sir John Perrot transformed the Welsh fortress into something more elegant. There was a rebuilding of the north front, he added the Long Gallery. Carew’s graceful Tudor-style windows can be enjoyed today.

Today the castle is nicely cared for and run by Pembrokeshire Coast National Park and more information to plan your visit is here: https://www.pembrokeshirecoast.wales/default.asp?PID=262

The Castles of Wales is a wonderful web site with contributions academics and enthusiasts alike) who have seen fit, for one reason or another, to lend their various talents to our efforts here under the leadership and inspiration of one Jeffrey L. Thomas