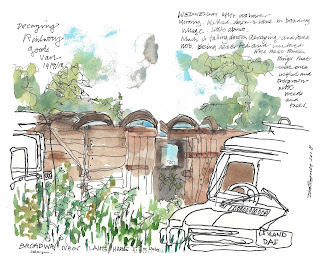 It was an early morning and almost sunny. I took Rosie for a walk down a narrow lane in Broadway, a small hamlet just west of Laugharne. It was very damp and the lane had uncomfortable feel. It runs beside and behind the Carpenters Arms with the pub’s barrels, pipes and paraphernalia clearly in view.

Further along this dank track I came across three vehicles in the verge, entombed in tree branches, brambles and high weeds. The first of the trinity was an old railway goods van; open to the sky, to its left was a once white vehicle with no identifying marks and on the right a Leyland DAF van.

Remember Leyland DAF? It was one the British motor industry’s offspring. Formed from a merger of Leyland trucks and DAF the Dutch company 1987 and six years later it passed away. A US company owns what is now left of Leyland.