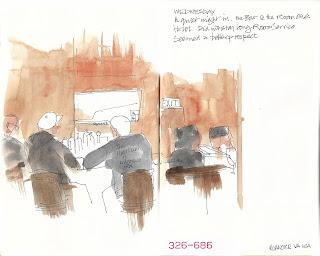 Three days staying the Roanoke Hotel. The hotel is great schloss-like building in the centre of Roanoke, in the state of Virginia, population 300,000.

I arrived late on a Sunday evening, always a strange time to enter a new place in a taxicab through the darkness from the airport.

The name Roanoke is said to have originated from a Native American word for shell "money" and probably of more value then than bit coins are today.

The Roanoke River passes through the city and cuts its way through the Blue Ridge Mountains; each morning I saw their peaks from my bedroom window. The area was an important hub of trails and roads. The Great Indian Warpath, which later became the Great Wagon Road, passed through.

Each hour trains whistle and groan their way through the heart of the city carrying freight, there has been no passenger service since 1979.  I watched these long lines of carriages and cars trundle, through seemingly for five or ten minutes before the end of the train finally disappeared.

Once my work was done I headed out, early Thursday evening, riding with a colleague in his white Ford pickup truck up to another part of Virginia, Fredericksburg. 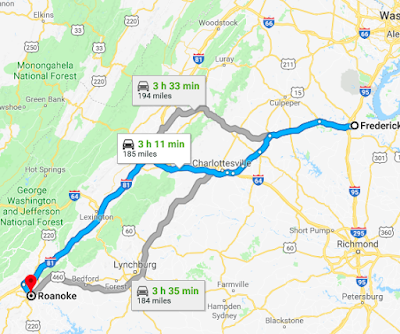