Drawing in Church 2 - The Nave with candy-twist columns 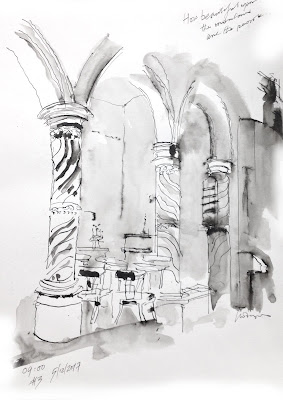 The nave and aisles were part of the original church, built between 1914-1916 in the Decorated style by architect George Halford Fellowes Prynne (1853–1927).

Prynne designed many parish churches mostly in the southeast and southwest, and almost always on a grand scale of high church Gothic Revival.

His plans here, for a spire and Sanctuary, never came to full realisation because of the First World War. We can though enjoy most of his vision for St Michael including the candy-twist columns that ‘process’ up towards a Sanctuary eventually built between 1954-55.

Proud stand the Advent Candles in their wreath of evergreen! 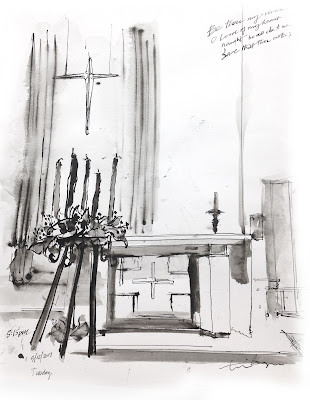 The wreath is shaped in a circle to symbolise the eternity of God. Four candles, one for each week in Advent, and one larger white candle in the middle as the Christ candle. This is traditionally a Lutheran practice; appropriate this year, 2017, the 500th anniversary of Martin Luther posting his 95 theses on the door of the castle chapel in Wittenberg.
Posted by Tim Baynes Art at 18:59