A VIEW FROM THE FLIGHT DECK – Part 1

My good friend Dave who flew Boeing 747’s begins a three-part part story; He shares fascinating insights and an incident or two.

First impressions?  It’s big in every direction, except the flight deck, which has to be the same size as any other commercial airliner.  Each of the pilots has to be able to reach all the important bits from either seat. Earlier 747s had three crew; two pilots, and an engineer, because the flight deck was quite complicated with old-style technology – especially the flight engineer’s station. The newer 747-400 was a 2-crew aircraft and much more refined… and quieter.

The flight deck itself is about 25 feet above the ground (third floor of a townhouse!) so the first sensation is how high up you are. There are no opening windows in the cockpit and it’s a long walk down to the ground, so a horn is fitted to the nose gear bay to attract attention.

Taxi-ing the aircraft requires mental adjustment from previous aircraft because the sensation of speed is much reduced and a groundspeed monitor (speedo) is used to stop you going too fast around the taxiways. Making turns is also an art as the aircraft pivots about the main wheels which are about 90 feet behind the person steering them.

For the same reasons, taking off for the first time felt very strange as it felt as if you weren’t accelerating and had to be confirmed by use of instruments.  Also on previous smaller aircraft, the engines were relatively close by and the noise became part of your feedback of aircraft behaviour but the jumbo engines are much further away and so engine instruments (like car engine rpm) were a more important part of instrument flying.

Landing a jumbo is equally challenging as the main wheels are touching down about 90 feet behind the cockpit and the pilots are still about 50 feet above the ground.  Then there’s the necessity to bring 250 tons doing 150mph to a stop in less than the available tarmac in front.  There are sixteen big tyres to do the job. 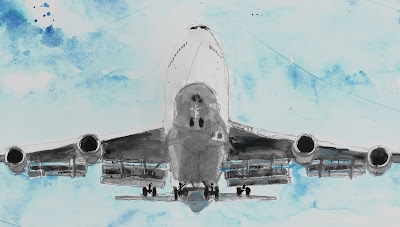 Now we come to the size and weight of the 747.  A big beast on all counts and required a good deal of respect and forethought. The   747-400 weighs just under 400 tonnes fully loaded, of which nearly half is fuel – some even carried in the tailplane.  Take-off speeds are around 160 knots which translates to 180 mph and at hot and high airports where the air is less dense, like Johannesburg for instance, the actual (True) speed is over 200 mph to get airborne.

Once in the air the handling is beautifully balanced…. I was once told by a training captain to “treat her like a lady and she will respond to your wishes” i.e., she doesn’t like to be thrown around.

A favourite. In Kingston I was taking over a flight from London to fly it on to Mo’ Bay.  The inbound crew had had a problem with a drunk loud-mouthed British couple and requested the police on arrival. Just before landing the man had attempted to steal some belongings of a neighbouring passenger.

Jamaican police are not small fellows and I observed the man was being escorted down the steps and then he swaggered off to the terminal.

Back at the airport the next day I spoke to a lovely BA operations girl and asked what had happened to him.  His girlfriend was being escorted back to the UK on my flight and the boyfriend was now residing in Kingston jail.  A white man.  She said the first thing that the other ‘guests’ do is to punch out their teeth… so the white honky can’t bite…. She then added, with a giggle, that his girlfriend might not want him back.