CHURCHING IN THE VALE OF THE WHITE HORSE 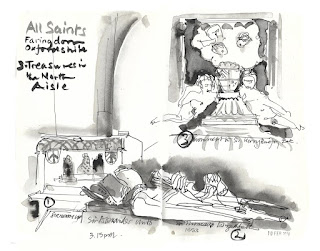 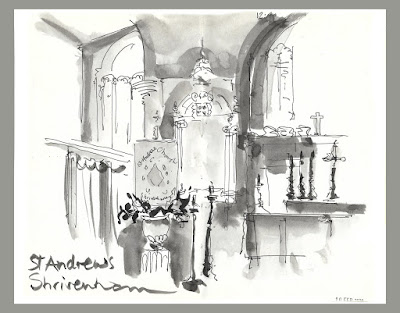 I billed this jaunt, to my cousin Wendy, as ‘lets go and see three Oxfordshire churches, three still on my list of not visited’.

There was a feeling of familiarity on entering the first, St Swithun Compton Beauchamp, a treasure tucked away in the Downs. The feeling increased when stepping inside the grey Tuscan-like enormity of St Andrew’s Shrivenham. A full confession was in order when we got to All Saints Faringdon!

I had been to all three before with cycling chum Ricardo. When I got home I pulled Moleskine number 40 off the shelf and discovered it was in September 2013. All three and a couple more, it was on one of those September Sundays when the open churches for charity-ride cyclists. 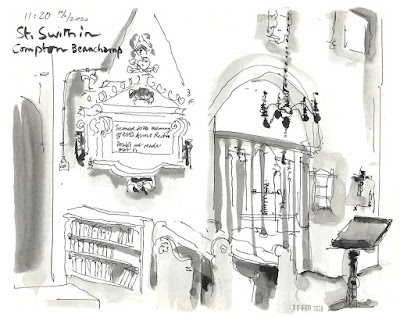 St Swithun ‘The interior is antiquarian rather than antique, fashioned for a modern enthusiast of the Anglo-Catholic rite.’*
Certainly the place is festooned with representations of Our Lady.

All Saints Faringdon ‘… the interior is full of incident, much of it Norman or only a little later.’*
There was an incidence of huge amounts of band equipment and associated junk that made enjoying the Unton family tombs a challenge’.

St Andrew Shrivenham  ‘The first impression is that Inigo Jones paid a flying visit, told a local builder to try Tuscan and then vanished.’*
I enjoyed making a sketch in the gloom of the chancel.

*Copyright of and taken from England's Thousand Best Churches by Simon Jenkins an essential companion to the delights of churching.